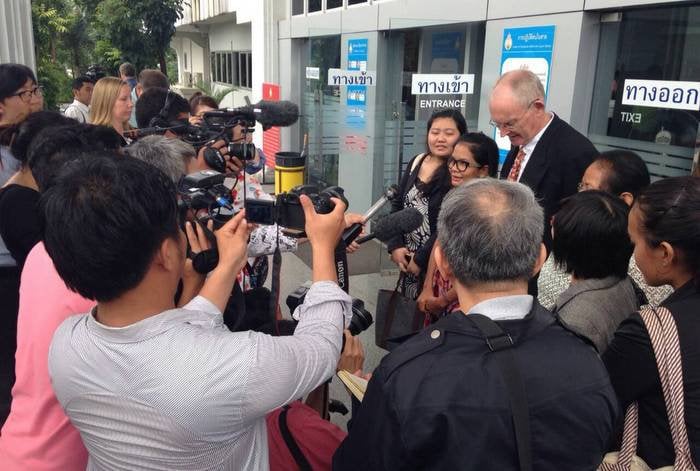 PHUKET: All charges filed by the Royal Thai Navy against Big Island Media, Alan Morison and Chutima Sidasathian were dismissed yesterday. However, the Navy’s right to file those charges was upheld.

Judge Chaipawat Chayaanantapat addressed a courtroom packed with international journalists, but was noticeably devoid of members of the navy and the prosecuting team.

According to the court hearing, the charges against the pair stemmed from a report published on July 17, 2013, which contained excerpts from a Reuters special report alleging that some Thai naval security forces worked with human smugglers to profit from the exodus. The integrity of Reuters as a source was one of the saving graces in the case, the judge noted.

The judge explained that three key points in the case were required to be understood.

“Firstly, we judged whether or not the Royal Thai Navy could file the complaint in this case,” Judge Chaipawat said.

“Capt Pallop Komalodaka of the Royal Thai Navy was authorized to file the complaint to police against the suspects over the use of the term ‘Naval Forces’ in the article.

“The suspects and defence lawyers made the argument that ‘Naval Forces’ does not necessarily indicate the Royal Thai Navy. However, the Royal Thai Navy is one of Thailand’s naval forces, so they had the right to file the complaint.

“Secondly, we judged whether or not the suspects were guilty of criminal defamation. The suspects took words from Reuters, which is counted as a reliable news source. We believe that Reuters has checked their facts before publishing. The suspects did not formulate the paragraph in question themselves. Given these factors, we found them not guilty of [breaking] Section 328 of the Criminal Code, .

“Furthermore, the Computer Crimes Act was not intended to be used as part of criminal defamation cases.”

Siriwan Wongkietpaisan, one of the defence lawyers, said that her team had taken the case because they felt that criminal defamation cases could not be coupled with the Computer Crimes Act.

“This is especially important to understand when it comes to the media. It could have a serious impact on them and make it even harder for them to work,” Ms Siriwan said.

Following the judge’s announcement, Ms Chutima and Mr Morrison addressed the international press outside of the court house.

“The judges have done the right thing to prove that in Thailand we can believe in the truth and freedom of the media,” Ms Chutima said. “The benefit is not only for PhuketWan, me and Alan, but beneficial for Thailand and everybody who lives in Thailand.”

Mr Morrison expressed his gratefulness to the Thai judicial system.

“[The verdict] speaks to the maturity of the relationship that should develop between the military and the media in the future. I think in a mature democracy, the military and the media both understand each other, and both recognize and respect each others’ roles. And that’s what we hope is the outcome for everybody in this case,” Mr Morrison said.