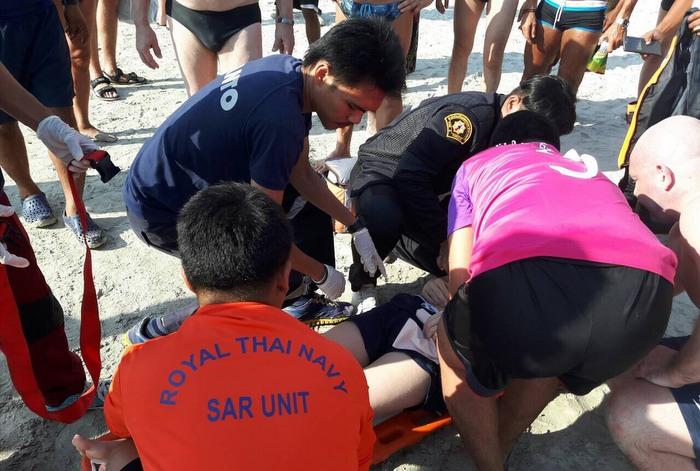 PHUKET: Concerns about operators allowing minors to rent out jet-skis in Phuket were raised at the monthly consulate meeting with the Governor on Wednesday.

Seven Smulders, the Dutch honorary consul for Phuket, told meeting members that he was worried about the potentially dangerous situations created by allowing minors to operate jet-skis.

Local jet-ski rental operators, who have remained under public fire for years due to numerous scams, brutish behavior and general safety concerns, were quick to clarify that the accident involving Pax did not involve their jet-skis. However, in late December two Chinese tourists were rushed to hospital after they crashed their jet-skis into each other off Patong Beach (story here).

The crash followed Karel Hartogh, the Netherlands’ Ambassador to Thailand, bringing jet-ski safety issues to the front line during a meeting between Phuket officials and ambassadors from five countries in November (story here).

“Most people on the island are not fond of jet-skis. They want to know if Patong is going to change its policy. If not, they will look for different beaches,” Amb Hartogh said at the time.

Amb Hartogh also pointed out that the tourism industry is very competitive, and that there are a number of other options for tourists who don’t want to put up with jet-skis.

At the meeting on Wednesday, Mr Smulders asked for clarification on the rules and regulations of operating hours, required licences for renting a jet-ski and minimum age restrictions.

“There is no need for a person renting a jet-ski to have a licence. There are simply provincial procedures that must be followed,” replied Phuripat Theerakulpisut, acting director of the Marine Office Region 5, who is charged with managing Phuket’s jet-ski operations.

However, Mr Phuripat failed to cite any specific legislation outside of the provincial rules regulating jet-skis on the island.

Mr Phuripat did agree to look into operators allowing people to illegally rent the vehicles past sunset. Additionally, he told those at the meeting that he would look into establishing a minimum age requirement.

Mr Smulders made it clear that he wasn’t attacking the Marine Office, but simply raising additional concerns about the operations.

Phuket Governor Chamroen Tipayapongtada, who headed the meeting, pointed out that, though jet-skiing was a fun tourist activity, it may be time to review the current safety regulations.

“Jet-skiing isn’t a bad activity for the island. However, there have been a number of times recently that tourists have had to be rescued, which means it is a good time to sit down and discuss if further safety measures need to be put in place,” Governor Chamroen said.

Full Metal Dojo ready to kick off at Seduction nightclub