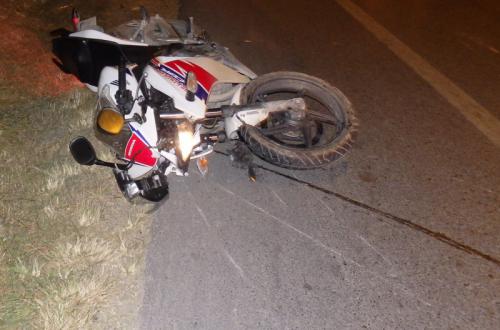 PHUKET: Phuket skated by the first day of the Ten Days of Danger campaign with zero deaths, but a big bike accident that killed a Ukrainian* early this morning puts the goal of zero road deaths out of reach.

The traditional Seven Days of Danger campaign was bumped to ten days in hopes of saving more lives during the extended holiday period.

However, Thung Thong Police and Kusoldharm rescue workers were notified of a fatal accident just past midnight on the Baan Kathu – Baan Samkong Road in front of the water treatment plant in Kathu.

Witnesses at the scene told police that the man riding a Honda CRB 250, a 29-year-old Ukrainian**, overshot a curve, bounced across the median and crashed into south-bound motorcyclist Pakawat Kongchang.

The man was pronounced dead at the scene, while 33-year-old Mr Pakawat was rushed to Bangkok Hospital Phuket.

“This is the first death reported during the 10 Days of Danger campaign. Please be careful and take care of yourself when driving,” Lt Sawanya Eiadtrong of the Thung Thong Police said.

* The man killed in the accident was originally reported as being a Russian national. The error is regretted.

**The Phuket Gazette is withholding the victim’s name until next of kin have been notified of his death.