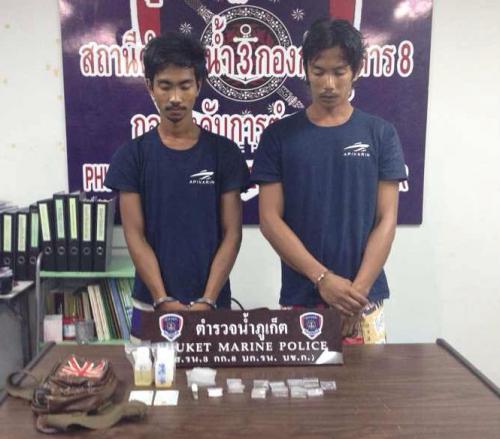 PHUKET: Two men who had just returned tourists by speedboat to the pier at Phuket Boat Lagoon were arrested yesterday afternoon for using ya ice (crystal methamphetamine); one was also charged for possession of over eight grams of the drug.

The men were apprehended as part of a holiday drug-sweep in the area, Marine Police Inspector Chatchai Sakdee told the Phuket Gazette.

“When they arrived at the pier with the tourists, we boarded their boat, Apivarin 2, and asked to see their work documents,” Lt Col Chatchai said.

Although the men had the necessary legal documents, a search of the boat turned up the illegal narcotics.

Boat crewman Weeraphol Chollakit, 20, admitted that he owned the drugs. When police submitted him and the boat captain, Prawit Yeemuda, 31, to drug-urine tests, both tested positive.

The two men were taken to Phuket City Police station and charged with using a category 1 drug, and Mr Weeraphol was also charged with possession of the drug with intent to sell.