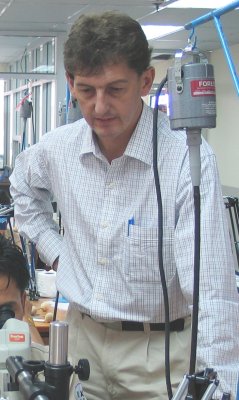 BANGKOK: CB Fine Jewelry is offering a reward of US$50,000 for information that will lead to the arrest of Anthony “Dirk” De Weirdt, a Belgian national and the former factory manager of CB Fine Jewelry, in connection with the alleged theft of gems and jewelry said to total 18 million baht from the Bangkok jewelers.

Bangrak District Police issued an arrest warrant for De Weirdt, 43, after the valuables were reported missing on Tuesday. The list of items reported includes half-finished jewelry, such as rings, earrings, bracelets, and pendants in 18-karat white gold and a combination of 18k yellow and rose gold. Loose diamonds are also said to be missing.

The theft is alleged to have taken place last Saturday (October 23), although the missing items were not noticed until three days later because of the bank holiday on the Monday.

Suspicions were aroused when Mr De Weirdt failed to turn up for work on Tuesday.

Police officers visited De Weirdt’s apartment and a hotel room that he had rented in the Sathorn area only to find that he had vacated them some days earlier.

De Weirdt, who is described as tall, slim and light-skinned, is thought to use several aliases, including Dominique Jean Denis Verbestel.

It is reported that he also carries a British passport in the name of Richard P. Branson, and police suspect that he may be traveling on forged travel documents.

De Weirdt has lived in Thailand for some time and is thought to speak some Thai as well as English, French and Dutch.

It is believed that before De Weirdt arrived in Thailand, he owned a diamond-setting shop in Antwerp, and that while there he allegedly committed fraud against several stone suppliers. This is said to have taken place before he moved to the Canary Islands and the Caribbean, before coming to Thailand.