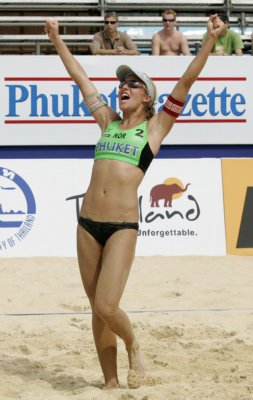 KARON: Americans Kerri Walsh and Misty May-Treanor, top seeds for the FIVB Phuket Thailand Open being held at Karon Beach this weekend, secured a place in the semi-finals by defeating fourth-seeded Nila Ann Hakedal and Ingrid Torlen of Norway 21-17, 19-21, 15-11 in 48 minutes.

The win extended Walsh and May-Treanor’s winning streak in the tourney to 11 matches The duo are also reigning Olympic women’s beach volleyball champions after winning gold at Athens in 2004. They are now just two wins away from their 25th Swatch FIVB gold medal since forming their partnership in 2001.

Also through to the semi-finals are second-seeded Tian Jia and Wang Jie of China, who secured a place by beating third-seeded pair Xue Chen and Zhang Xi, also from China, 21-16, 10-21, 20-18.

Today Xue and Zhang will play either eighth-seeded Nicole Branagh and Elaine Youngs of the US or 18th-seeded Merel Mooren and Rebekka Kadijk of the Netherlands for a semi-final spot opposite of May-Treanor and Walsh.

Hakedal and Torlen, the top-ranked European team on the tour, will play the winners of the match between 10th-seeded Dalixia Fernandez Grasset and Tamara Larrea Peraza of Cuba and 26th-seeded Morgane Faure and Virginie Sarpaux of France for a spot in the final four against Tian and Wang.

Faure and Sarpaux have posted their best-ever finish together on the FIVB tour as the French pair seeks their country’s first-ever appearance by a women’s team in an open beach volleyball semi-final. Faure and Sarpaux’s only setback in the competition so far was a 21-16, 21-13 loss to Tian and Wang yesterday.

Top prize for the tourney is US$200,000. The third-place playoff and the final will be played tomorrow. The final will start at 3 pm.