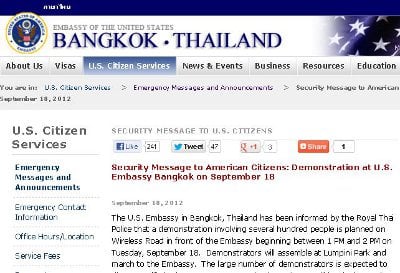 PHUKET: The US Embassy in Bangkok has confirmed to the Phuket Gazette that the recent security warning issued to all American citizens was not linked to any specific threats in Thailand.

The warning, issued by the US Embassy in Bangkok, reads: “As a general precaution, the U.S. Embassy advises you to exercise caution and to be aware of your surroundings, particularly around large crowds or gatherings. Even demonstrations intended to be peaceful can turn confrontational and possibly escalate into violence with little or no warning. You should avoid areas that may be targeted for demonstrations and exercise caution if within the vicinity of any demonstrations or large gatherings.”

The warning was issued after the Royal Thai Police informed the embassy of a demonstration “involving several hundred people is planned on Wireless Road in front of the Embassy between 1pm and 2pm on Tuesday, September 18.”

Due to the expected protest, the US Embassy will close to the public at midday tomorrow and non-essential personnel will be sent home.

Visa and citizen service appointments for tomorrow afternoon are being rescheduled.

“The United States is doing everything we can here in Thailand and worldwide to protect our diplomats, our facilities and our citizens,” US Embassy Bangkok spokesperson Walter Braunohler told the Gazette this afternoon.

“We are in constant touch with the Thai authorities and understand that we need this close cooperation to make sure everyone stays safe,” he added.

The demonstration in Bangkok comes as part of a wave of anti-American movements across the world, which have been linked to the recently release of the anti-Islam YouTube film “Innocence of Muslims”.

Google chose not to remove the video from YouTube after a request by the Obama administration for the internet giant to review whether or not the film complied with YouTube’s terms of use.

Despite condemning the video, the Obama administration will not apologize for its existence, reported Fox News.

“We have made it clear that we find it offensive and reprehensible and disgusting,” Mr Carney told reporters at the daily White House news briefing on September 14.

“We have denounced it. We have said we find it offensive and reprehensible, but we will not – you know, we cannot and will not squelch freedom of expression in this country.”