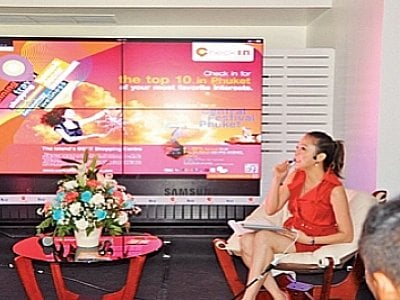 The two new mobile applications; “Tiny Coffee” and “Check in 4 Good Deals” were simultaneously launched last week at a press conference held at the Tiny Coffee shop next to the Anuphas Ford showroom in Phuket Town.

Managing Director of both Boonsoong and Phebe5, Chaluckkamol Fuengchan, explained to the Phuket Gazette that both applications were designed to target local consumers’ needs and to serve as valuable resources of information, accessibility, navigation, deals and discounts on local products and services. She said that they will mainly differ from each other in clientele lists and functionality.

“In addition to multimedia, games and competitions, Check in 4 Good Deals will offer discounts from a wide array of Phuket retailers and outlets,” she said.

Companies taking part in the discount scheme include those involved in home and decor, hotels, pools, villas, media, transport, wellness and shopping, and include listings by Scandinavian Living and Central Festival, among others.

“The Tiny Coffee application will focus mostly on Anuphas Group companies including Tiny Coffee in addition to its real estate and car dealerships such as Ford, Mazda and Honda,” she explained.
The apps feature real time navigation technology to assist in locating the companies as well as direct calling for easy access to services. Both applications are fully integrated for sharing information on social network sites such as facebook.

The Tiny Coffee app also features an augmented reality (AR) game, touted to be the first available in Thailand. Players turn on their phone’s cameras and tap logos that appear on the screen. Each successful tap wins points which can be cashed in at Tiny Coffee outlets at a rate of 10 baht per 1000 points.

To support the mobile applications there is a also a free interactive e-magazine, including deals and local life-style indices, which can be downloaded for free at Checkin4gooddeals.com.

Ms Chaluckkamol explained that both the magazines and mobile applications’ index listings and designs will be updated every three months, with the next revision due in January 2012.

Both applications are available in the English language and are free to download at Apple’s Apps Store. For those who don’t own iPhones, iPads or iPods the e-magazine can be downloaded from Checkin4gooddeals.com.