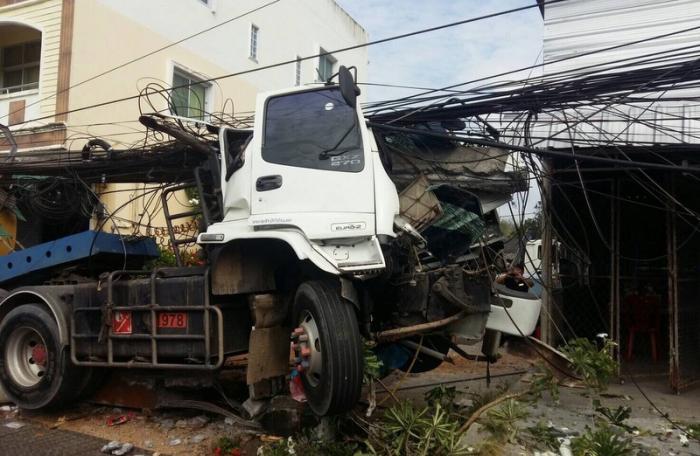 PHUKET: Two people were injured when a trailer truck carrying a backhoe crashed into an electric pole in Phuket’s Thalang yesterday afternoon.

Thalang Police received news of the crash on Thepkrasattri Road northbound at about 3:45pm. Officials and rescue workers rushed to the scene where they found the truck trapped in a jumble of wires.

“The front side of the vehicle was heavily damaged. We found the driver, Somporn Thiepput, 45, in a confused state. He was still inside and had injured his back,” said Police Lt Sunan Petnhu.

“There was also a child with him, who had sustained minor injuries in the crash,” he added.

The driver told police that he was heading back from Phuket Town when a pick-up truck driving in front of him braked “without warning”. He added that he hit the brakes, but as his vehicle was “too heavy”, he lost control, hitting the pole at the side of the road.

The incident caused a traffic jam for several hours on Thepkrasattri Road.

Mr Somporn was charged with reckless driving and causing damage to public property.

Teen robbery suspect on the run after bag snatch arrest