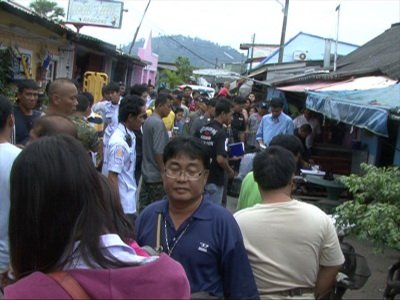 PHUKET: Police suspect an explosion that killed two and injured four people in Rassada, near Phuket Town, early this afternoon was caused by an M67 grenade.

Police arrived at the scene near Rassada Pier and found one man dead on a bench in front of a house on Soi Wanich 1.

The man, identified as Sutthi Saeung, 25, of Nakhon Sri Thammarat suffered wounds to his chest. His right hand was blown off.

Based on initial investigations, police said that Mr Sutthi, a crewman on the Chok Maneedech, had shown the grenade to friends for fun when it slipped out of his hand and exploded.

Police said Mr Sutthi arrived at the scene drunk and continued to sit and drink beer in front of the house with a friend and three girls working in a nearby karaoke.

While he was drinking, he pulled out an M67 grenade to show the others and said that he bought it as a gift for the girls on the soi.

However, the grenade slipped out of Mr Sutthi’s hand and as he tried to catch it, he only managed to grab the pin as it fell to the ground and detonated.

Four others were injured in the blast.

Sunee Pompetch, 36, from Nakhon Sawan suffered serious injuries to her left leg and torso. Hansa Monkol, 21, sustained wounds all over her body.

Mr Kian Saephu, owner of a grocery shop next to the scene of the explosion, suffered wounds to his back while a 20-year-old woman identified only as “Patchree” suffered a hand injury.

One witness, Somjai Songkram, 50, said that Mr Sutthi always sat in front of the shop after returning from sea.

She said that this time he came with a friend and ordered food and beer, and that she had been sitting with the pair earlier in the day.

Shortly after she walked back to her house, she heard a sound “like an explosion from a transformer”.

She then heard one of the women screaming for help and saw her running from the scene covered in blood.

UFC’s Dana White steps in to save Phuket baby