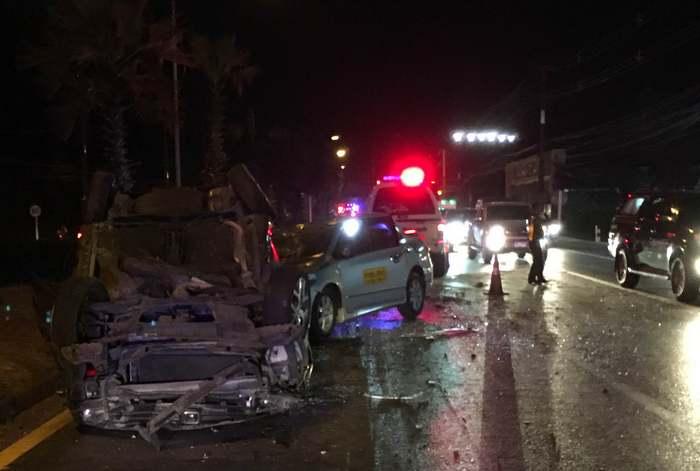 PHUKET: Six people, including two French tourists, were injured after a car slammed into a Phuket taxi yesterday evening.

“Witnesses explained that the northbound Honda City flipped over as it hit the median, slamming into the green plated Toyota Altis in front of the PTT petrol station in Baan Muangmai on Thepkrasattri Road,” said Capt Santichai Srimai of the Thalang Police.

Everyone was originally rushed to Thalang Hospital. However, the French women, named as Arnud Schneider, 21, and Chloe Gabrielle, 20, were later transferred to Bangkok Hospital Phuket, while their driver and the three Thai nationals travelling in the Honda City were taken to Mission Hospital.

Representatives from both hospitals have declined to provide further information regarding the condition of the patients.

Police have yet to press any charges and are continuing their investigation into the case, confirmed Capt Santichai.

The crash came at the end of day two of the national ‘Seven Days of Danger’ campaign (story here).

“One Last Party’ before iconic Phuket beach clubs get demolished