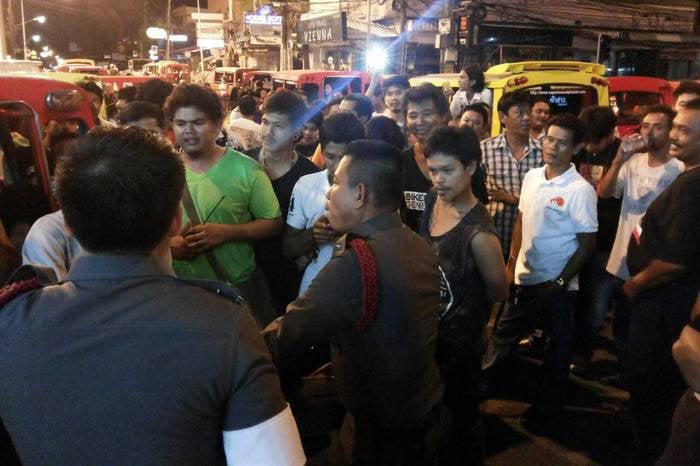 PHUKET: Thirteen tuk-tuk drivers who were charged for their involvement in a massive blockade of Patong in March last year were fined and sentenced to one year’s probation yesterday morning.

The 13 drivers were part of a group of 68 drivers who were arrested and charged for blockading major roads in the party town in protest of the arrests of four tuk-tuk drivers for preventing green-plate taxi drivers from using public parking spots the day before (story here).

“The drivers were handed the sentence this [yesterday] morning. They were fined 3,000 baht each and put on probation for one year,” Chief Judge Sakun Suanpharn of the Phuket Provincial Court told the Phuket Gazette.

According to the court’s public documents, the 13 drivers were first sentenced to one year in prison and a fine of 6,000 baht each. However, since they confessed to their crimes and accepted the charges following their arrests, their sentences were halved to six months in prison and a fine of 3,000 baht. Because the drivers had no previous criminal records and were not considered a flight risk, the six month sentence was suspended to one year of probation, in addition to the 3,000-baht fine.

“The other 55 drivers denied the charges after arrest. Their trials are being held separately,” Chief Judge Sakun added.

The chief judge urges all island-dwellers to refrain from using violence to achieve a goal.

“I have noticed during my year in Phuket that some people like to push officers by using violence or blockades. I have seen it several times,” he said.

“This is not a good idea. Initiating or joining in a blockade can cost you more than you expect. Innocent people can end up getting involved and facing trouble because of your actions. This is not good for Phuket’s image.

“If you have a problem, aim for peaceful reconciliation, not violence. If you cannot sort it out yourself, we are here to help you.”