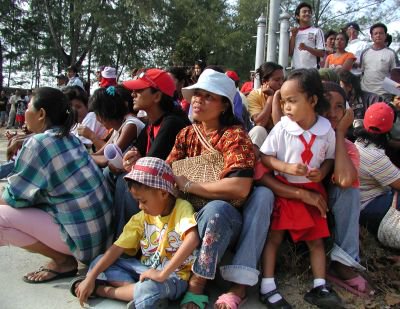 KAMALA: More than 300 residents gathered yesterday evening to hear Phuket Governor Udomsak Usawarangkura explain why they must start paying rent on land where they have lived for many years rent-free.

Addressing the meeting at Kamala Police Station, Gov Udomsak said, “Government policy is to bring back tourists by reorganizing beaches and public places. If the places are restored and improved so they look better, the tourists will come back soon.

“The number of tourists coming to Phuket is 80% down on normal. We are trying to implement government policy as soon as possible, but this does depend on help from local residents as well.”

Gov Udomsak told the protesters it had already been decided to widen the waterfront road to eight metres, and that residents would have had to move back from the high water mark and the public road anyway.

And, he added, “You have been living here illegally because you have encroached on public land; now we are giving you the chance to live here legally, by renting the land from the government.”

The Governor tried to reassure the residents that they would have security of tenure, as the land could be handed down from generation to generation, with the rental contracts being checked every five years to ensure they stayed in order.

He said, “There will be no problem in renewing the contracts. You can live on the land for 30, 60 years, and on into the future. This is fair, and the right way to do things in Thailand.”

And, he warned, “If you still don’t want to do this, you should find some other land to rent or live on legally. But if you still want to live here, you should follow the regulations.”

He continued, “If you hold land titles legally, there won’t be any problem. But if you don’t, well, the same rule applies everywhere, even at Bang Tao and other beaches.”

However, resident Chai Tiangnoi said, “Renting means we don’t have something that we can call our own.

“We have been living here for a long time, but all of a sudden, we’re told we have to rent our place from the government. I’m not even sure which is government land. We’ll have to discuss later whether we are prepared to rent this land or not.

“Kamala used to be a nice place for tourists, but now the government is trying to stop us from doing anything like rebuild our homes. Will the tourists come here if there is nothing here?”

Kathu District Chief Kanthee Sinlapa suggested that, to settle the dispute, residents be offered long-term rental agreements, or that the status of the land be changed so that it is no longer state land, and land titles could be issued for it.