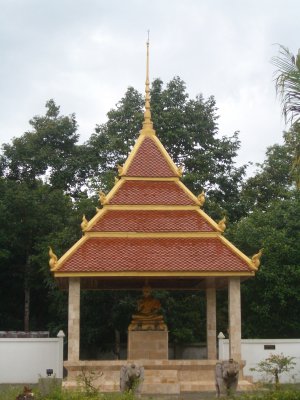 PHUKET: A special committee set up by the province is investigating allegations of fraud against the former director of a foundation set up in March last year to care for children left orphaned by the tsunami.

The panel was formed about six weeks ago following complaints to Governor Udomsak Uswarangkura. The provincial Ombudsman’s office was ordered to investigate the activities of Narin Dangtakote and his Swedish wife Maria Floren. Their Thai-Sweden Children’s Foundation has actively solicited millions of baht in donations from Swedes, then allegedly used the funds for other purposes.

The orphanage, which received foundation status on March 18, 2005 with initial funding of about 550,000 baht, is located on land donated by Wat Muang Mai in Tambon Mai Khao, Thalang.

News of the alleged fraud has been front-page news in Swedish newspapers including Expressen, which has been actively following the case. Earlier this month, Bangkok-based Expressen reporter Michael Topffer interviewed Phuket Deputy Governor (Palad) Nivit Aroonrat, who chairs the investigation panel.

Mr Topffer told the Gazette that Palad Nivit had confirmed that the foundation was under investigation and that, because of the controversy, Palad Nivit had advised against a visit to the orphanage by Swedish royals HM King Carl XVI Gustaf and HM Queen Silvia during their recent visit to Phuket.

K. Narin and his wife moved to Phuket several years ago and began building a property development aimed at Swedish buyers. When the tsunami struck, work on the development was almost complete. The couple offered temporary housing to Swedish victims of the disaster and were portrayed as heroes by the Swedish press, Expressen reported.

In January 2005, the couple declared their intention to open an orphanage, asking the Swedish public for donations. According to the foundation’s financial report, more than 20 million baht was collected.

Some Swedes who made donations to the orphanage and then visited the home asked Expressen to investigate rumors of financial impropriety and claims that the children at the orphanage were not, in fact, tsunami victims.

However, Yalinee Saisikosol, who has been working as an administrator with the foundation for two months, said that initially the orphanage had many tsunami-affected children, but that the number had dwindled as the economy began to improve and relatives came to claim them.

“We spend about 20,000 baht a week providing three meals a day for students, paying for their school fees, transport and covering expenses of our employees and volunteers. Sometimes there are additional costs, such as when we take the children out for a day at the beach,” she said.

The provincial investigation is focusing on the foundation’s finances. Last week, the committee sent one of its members, the head of the Provincial Public Works Office, to inspect buildings at the site to see if construction costs had been inflated.

Nikorn Torhirunyapreuk, Chief of the Phuket Provincial Defense Office and also a member of the investigation committee, told the Gazette that although the panel is still in the process of gathering information, it intends to try and have the orphanage’s foundation status revoked.

If sufficient evidence can be gathered, any wrongdoer will be prosecuted, he said.

“We know the foundation has only two children there who were affected by the tsunami. Another 10 children were brought in from Isarn, which is different from the stated objectives for setting up the foundation.

“As they have only two children there [full-time], why did they need to buy so many pickup trucks? We are checking on this now,” he said.

“From our initial investigations and two rounds of questioning with K. Narin, we believe there has been some dishonesty. We asked him for information regarding the construction of a sala which should have cost 500,000 baht to build, not two million baht.

“K. Narin told me that it is still unfinished. But if that is the case, why did he pay the contractor in full six months ago? According to government regulations, payment for construction should not have been made until the work was completed.

“We have to investigate this further, however, including questioning the contractor and looking into tax records,” he said.

Central to the investigation are allegations that donations were transferred to six different bank accounts, but the foundation listed only two.

The committee is also inspecting the foundation’s other expenses, including its 1,500-baht-a-day expenditure to provide meals to children.

K. Nikorn said that while the two foundation accounts show about 20 million baht in donations, the actual amount might be much higher.

“It would be good if we could gather together all the receipts issued to donors, so that we can learn how many bank accounts K. Narin used and how much was collected,” he said.

The Swedish media had played a key role in publicizing the story and helping his agency collect evidence, he added.

When the Gazette tried to call K. Narin on June 26, a man identifying himself as K. Narin’s cousin answered the phone, saying that K. Narin had gone abroad “to relax”. The Gazette tried contacting K. Narin by email but, at the time of going to press, had received no reply.

During a visit to the orphanage on June 26 by a Gazette reporter, staff said that K. Narin had resigned as director last April, but had continued to direct the foundation in a caretaker capacity.

Staff said the orphanage currently has 21 children, four or five of whom were affected by the tsunam