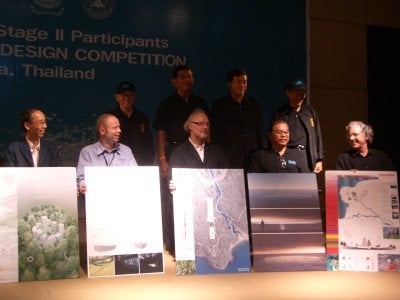 KHAO LAK: Design teams from Finland, the US, Spain, China and Australia have made it into the finals of the competition to design a tsunami memorial, which will be erected on Lek Beach in Khao Lak Lamru National Park.

The five teams that made the cut are Anu Puustinen and Ville Hara, from Avanto Architects of Finland;

and Richard Weller and Gary Marinko of the University of Western Australia.

Each team will receive a million baht for making it into the final of the design competition, with the eventual winner receiving the contract from the Thai government to work on the memorial itself.

A total of 379 individuals and teams, from 43 countries, submitted designs for the competition. These were cut down to the final five by an international team of judges.

One of the judges, architect MR Chanvudhi Varavarn, said, “This is the first time that such an international competition has been organized in Thailand. The competition was perfectly organized and the entries were world-class.”

The next step will be a conference from January 21 to 24 at which the memorial project will be discussed in detail so that the five finalists can make any necessary changes to their proposals. The amended proposals must be submitted to the panel of judges by next May 2.

The panel’s choice will be presented to the government on May 15, with the winner being announced publicly a week later. The winning design will also be showcased in an exhibition in Bangkok from June 1 to 15.