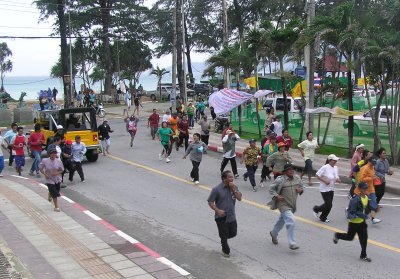 PATONG: The sirens went off (click here for a sound clip), but only about 200 people joined a tsunami evacuation drill in Patong yesterday afternoon, with rain being blamed for the poor turnout.

Boonchai Somjai, Head of Phuket Provincial Office Disaster Prevention and Mitigation (ODPM), told the Gazette, “I was in Patong when the evacuation drill began. It went satisfactorily, mainly because the people who took part already knew how to evacuate [the beach].

“But not too many people joined in the evacuation drill because of the rain.”

He explained that two evacuation drills were held in Phuket yesterday: one at Patong Beach and another at Bang Tao Beach.

“The drill was like a real emergency evacuation because we had only a little time to announce to people [that an evacuation drill was being held].

“Patong Municipality did very well. They publicized the evacuation widely so most people in Patong knew about the drill before it was held,” K. Boonchai explained.

Tsunami evacuation drills will become a regular event on Phuket beaches, he said. “All the local authorities – the OrBorJor [provincial], Tessabaan [town] and OrBorTor [subdistrict] bodies – will coordinate to hold island-wide evacuation drills twice a year,” he said.

K. Boonchai added that public announcements will be made before tsunami evacuation drills are held, unlike on Wednesday this week when tsunami warning sirens sounded after being set off by mistake during a test of equipment.

“By announcing to people that there will be evacuation drill and the sirens will go off, it will not scare people as happened on December 14,” he said.