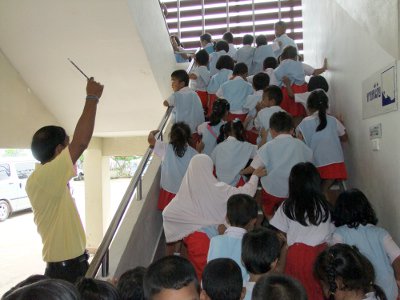 The drill, organized by Patong Municipality, will involve 191 students and teachers from Baan Kalim School and from Tessaban Baan Sai Nam Yen School, in the heart of Patong.

The teachers and students from Baan Sai Nam Yen School will travel to Baan Kalim School to take part in the exercise.

According to the drill schedule, students will be in the middle of a football match between the two schools when the tsunami evacuation alarm will sound at 3pm.

The alarm will sound on school speakers only, the Gazette was told.

The director of Baan Kalim School will also announce over the school’s public address system that the evacuation drill is underway.

Students and teachers will progress to the tsunami safe zone on the third floor of the school’s main building.

They will remain there until they are told it is safe to return to ground level.

Directors from both schools will report to Patong Mayor Pian Keesin, before the mayor declares the exercise over at 3:30pm.