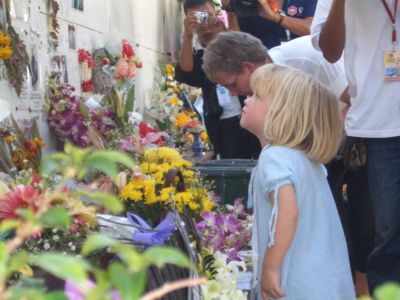 PATONG: In an emotionally charged ceremony, survivors and relatives of the tsunami dead congregated in Patong’s Loma Park this morning to remember their lost loved ones. It was one of six official memorial ceremonies in the three provinces hardest-hit by the disaster this day last year.

A crowd of about 2,000 people from many countries gathered at Loma Park at 10 am to observe a minute’s silence after a brief speech by Tourism and Sports Minister Pracha Maleenont.

Uniformed students handed out white roses which people then queued to lay on a memorial plinth.

One demonstration of the atmosphere and the still-raw emotion felt by many came from a Western woman – the relative of a victim – who pleaded over the public address system for the media to put down their cameras and let the mourners take part in the ceremony in peace.

Many of those present – and some members of the media – did as she asked and left, going down to the shoreline to gaze westward and then leaving the heavily policed area.

Meanwhile, at Mai Khao Beach, more than 500 people congregated at the tsunami “Wall of Remembrance”. Many had come by coach from Satun and neighboring provinces hit by the giant waves.

Several foreigners at the Mai Khao ceremony had accepted the government’s invitation to attend, and many held pictures of loved ones who were lost a year ago.

Christmas wreaths were also laid at the wall, and many of those present shed tears as they embraced and remembered the people who had died.