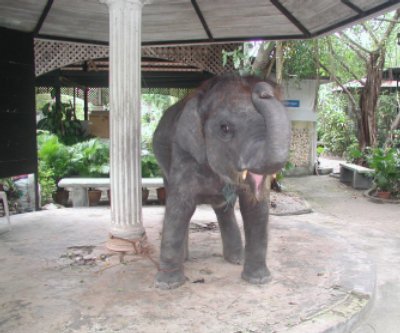 PHUKET: Phuket Governor Udomsak Uswarangkura inspected the Phuket Zoo on Friday after receiving written complaints from about 10 tourists about the maltreatment of animals and the quality of water in pools there.

The Thailand Zoological Park Organization (TZPO), the Tourism Authority of Thailand and a number of NGOs have also received similar complaints about the private zoo, which opened in 1997.

The Governor received the complaints via the Damrongtham Center, which acts as the provincial ombudsman.

Phuket Zoo, located on 30 rai of land in Palai Green, is home to an aquarium, crocodiles, ostriches, seven elephants, four tigers, six monkeys and a number of other animals.

Gov Udomsak toured the zoo with the owner, Preecha Tantaweewong, and asked him about the water and the use of chains to restrain elephants, tigers and monkeys.

K. Preecha told the Gazette afterward, “The Zoo specializes in animal shows, which makes it more interesting than an ordinary zoo. We have no intention of abusing or torturing animals. We try hard to take good care of all the animals in the zoo. For example, we have a tiger that we raised from when it was a cub; the public can come to take photos of the tiger and the money we earn from the photo-taking is put towards the zoo’s upkeep.

“I care about all our animals, but, as I explained to the Governor, if we didn’t chain the monkeys, for example, they would do whatever they pleased, whenever and wherever. We do not put them in cages.

“This zoo is not a safari-type open zoo that people can drive through in a car. We cannot release the animals and allow them to roam around because they could disturb, and possibly frighten or injure tourists who are walking around,” K. Preecha said.

“As for the water, it is from a well and because the soil around the source is black, and the water is brackish, the color and smell of the water make it appear dirty. If I am able to finance it, I will treat the water in the future, to improve the overall quality of the zoo and encourage tourists to visit.

“Who wants to buy a ticket to visit a place that’s dirty?

“I am going to attend a meeting of the TZPO in Bangkok on November 14. I hope to return to Phuket with ideas to improve the zoo and make it a more a popular tourist attraction,” he said.

Award for Phuket from vegetarian mag