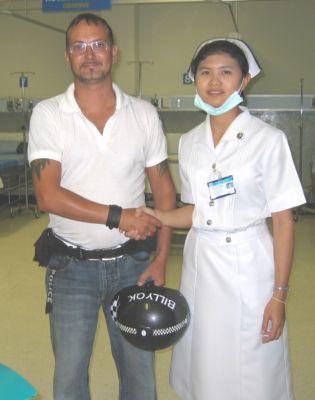 PATONG: Kathu Police are treating as “probable suicide” the death of UK national James Alasdair Elliott, 37, who was found hanging by the neck from a ceiling fan in a rented room on Nanai Rd.

Kathu Police Duty Officer Capt Songserm Preecha said police were notified of Mr Elliott’s death at 10:30 am yesterday by Preecha Chormanee, owner of the Nanai Apartments on Soi Nanai 1, where Mr Elliott rented a room on the third floor.

Entering the room, police found Mr Elliott hanging by the neck from a nylon rope that was tied to the room’s ceiling fan. He was wearing only a white T-shirt and white underwear.

The room was cold as the air conditioner had been left running and the television was also left on, but there were no signs of struggle, theft, wounds to the body or other evidence of foul play, Capt Songserm said.

Police estimated Mr Elliott died no fewer than five days before his body was discovered.

Staff at the apartment building told police that Mr Elliot had been living in the apartment for about eight months and had worked as a Tourist Police volunteer since the tsunami.

Immigration Police volunteer Tim Gardener described Mr Elliott as a very intelligent man who had served as a medic in the British Royal Navy.

Mr Elliott’s medical background and outstanding language skills, he spoke about eight languages, made him valuable in assisting foreign patients at Patong Hospital, he said.

Mr Gardener had taken photographs of Mr Elliott just a few days before he took his own life as he intended to promote all the good work Mr Elliott had done as a Tourist Police volunteer since the tsunami, Mr Gardener said.

“He made tireless efforts to assist in the DNA testing and identification of tsunami victims – a dreadful task for anyone to perform. Billy deserved extra credit as he did all this unpaid from the goodness of his heart. The staff at Patong Hospital called him ‘Billy OK’.

Mr Elliott’s friends in the hospitals and the volunteer Tourist Police were “obviously shocked” by the news that he had taken his own life, Mr Gardener told the Gazette.

“He was a fantastic person. What a loss, that’s all we can say,” he said, adding that he felt it was strange that someone of Mr Elliott’s intelligence would take his own life without leaving behind a note to explain why.

107 illegal Burmese rounded up in crackdown