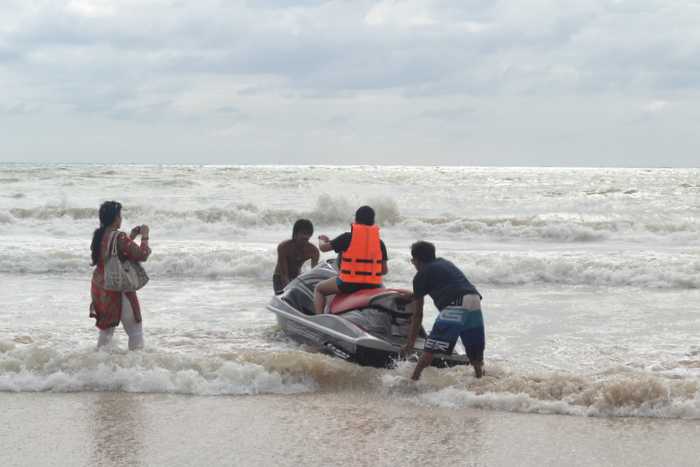 PHUKET: The lack of progress in reining in jet-ski operations on Phuket was one of many key topics at the American Chamber of Commerce (AMCHAM) forum yesterday, which focused on the future of Phuket’s marine tourism industry (story here).

“We now have another governor to speak to, and, unfortunately, the first subject is going to be jet-skis,” Phuket Honorary Consul Martin Carpenter said at the forum. “And what is going to be done about it… I believe absolutely nothing, at this moment.

“I’m quite happy for you to write what I’m saying down, but unfortunately there is no current evidence that anybody in government, except for here [at AMCHAM], is really taking this issue as seriously as many people want them to take it.”

Mr Carpenter told the Phuket Gazette after the forum that no substantial progress had been made, outside of some progress with insurance, in regulating jet-skis or protecting tourists from the variety of scams jet-ski operators are known to employ.

For years, jet-ski scams, and the damage they have caused to the island’s reputation, have been at the forefront of Honorary Consuls’ meetings with the governors of Phuket.

In 2012, Mr Carpenter asked the Marine Department chief if he could provide clear information warning tourists of the potential problems they may get into while renting a jet-ski.

(Read a summary of them at the bottom of this report.)

The concerns voiced by Mr Carpenter and other businesses owners on the island stems from jet-ski and parasailing operators being the only businesses allowed to use the beach in any capacity since the National Council for Peace and Order’s (NCPO) island-wide cleanup.

Permission to rent jet-skis to tourists was validated earlier this month despite mishaps, injuries and the death of a Russian tourist in a jet-ski accident (story here).

Mr Phuripat announced the news on November 4, when he explained to Governor Nisit Jansomwong that jet-ski operators could stay as long as they followed new rules brought into effect on October 1 (story here).

If they fail to follow the rules, they face the possibility of an island-wide ban on all jet-skis, he said.

However, the ultimatum was Mr Phuripat’s second “last chance” warning. He earlier vowed to revoke the permits of any operators whose businesses or jet-skis were involved in any untoward incidents (story here).

The issue of jet-ski scams has grown to the point that the Tourism Authority of Thailand (TAT) announced a plan in August to work with the Department of Tourism, under the Ministry of Tourism and Sports, to resolve the issue of tourists being scammed by corrupt jet-ski operators.

The move comes after the NCPO issued a command to clean up and regulate the jet-ski business operating in many of Thailand’s major beach destinations.

Jet-ski scams have been damaging the reputation of Thailand’s tourist sector for some time. Most often, having returned a rented jet-ski, tourists are told that they have damaged it and have to pay a hefty repair fee (up to 100,000 baht in some cases) for damage and scratches that were already present, reported the TAT.

“These large fines are often extracted under the threat of violence, and many tourists have taken the step of lodging complaints with their national embassies after being scammed by jet-ski operators,” the TAT report explains (story here).

To better gauge public opinion on whether jet-skis should stay, the latest Gazette poll asks readers: “Should jet-ski operators be allowed to operate on Phuket’s beaches? Make your voice count and vote in the poll (on the right-hand side of your screen).

Jet skis are required by the Marine Department to have “first class” insurance coverage. Currently, many rental operators are going for two policies. One to cover the mandatory requirement to insure riders and passengers, and a second covering damage to property while also providing a “reserve” should medical bills out-strip the limit of the first policy.

The TUI policy covers the jet-ski driver and one passenger for personal injury or death, and limited medical costs. Each contract will not pay more than 300,000 baht per jet-ski annually.

Death or permanent disability of rider or passenger: 100,000 baht.

Medical costs of rider or passenger: up to 15,000 baht per person.

SAGI’s insurance policy covers the same range of risks at a lower payout, but also includes third party liability and damage, including damage to the jet-ski. The contract will not pay more than a total of 200,000 baht per policy.

One injured in boat engine explosion north of Phuket