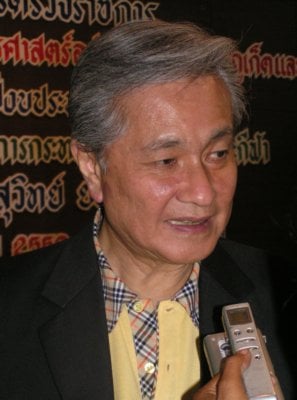 PHUKET CITY: Tourism and Sports Minister Dr Suwit Yodmanee yesterday announced that August 24 will be the deadline for Phuket Governor Niran Kalayanamit to decide on a location for the long-awaited International Convention and Exhibition Center (ICEC).

Dr Suwit set the deadline at a meeting at the Phuket Merlin Hotel – one of several meetings being held by the minister to gather feedback from government officers during his tour of Phuket, Phang Nga and Krabi.

Speaking to Gov Niran, Dr Suwit said, “Phuket attracts more than 80 international meetings each year. It’s important for the Ministry of Tourism to support Phuket in having a convention center. I need Phuket to quickly decide on a location by itself, and if you have any problems, please ask us.”

However, Dr Suwit said that any budget from the central government must wait until the next budget year, which begins October 1.

“I know that deciding on a location is difficult for the province because all three private investors have submitted good locations, and Phuket must now consider which location will best match the government’s interests,” he said.

(Click here for full story on private company site proposals for the ICEC.)

“Next year the Asian Disaster Prevention Center will have about 23 countries, including seven African countries, that will be connected to a central tsunami warning system. Every country affected by the tsunami has placed being part of the warning system as a high priority,” he said.

Gov Niran, however, raised the problem of illegal Korean tour guides working in the Phuket.

Dr Suwit replied, “I have received information from the TAT [Tourism Authority of Thailand] that says there are not enough Thai guides to cater to [to the large numbers of] Korean tourists.

“I suggest Phuket hold a nation-wide campaign to find Thais who speak Korean well. Once we have enough Thai guides to serve the Korean tourist market, I will make sure that Thai guides will be the guides for Korean tourists – not Koreans.

“It is illegal for non-Thais to work as tour guides in Thailand. Phuket must get serious in dealing with this problem – and Phuket is the top tourism destination in Thailand for Koreans, so they are an important target group of tourists.”

Gov Niran took the opportunity to suggest to Dr Suwit that Phuket have not one, but three mobile CCTV units. “Phuket is successfully using the 36 CCTV cameras installed around the island now, but it would be perfect if we had three mobile CCTV units – one for each district. They aren’t expensive and they can move around to monitor different areas.”