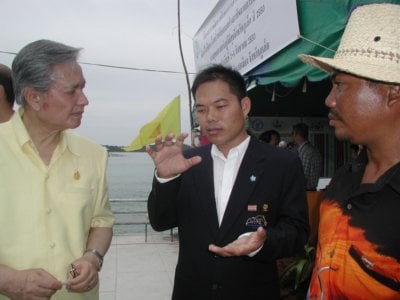 RAWAI: Twenty villagers from Rawai’s sea gypsy community are taking part in a five-day dive course that kicked off with a ceremony Thursday morning presided over by Minister of Tourism and Sports Dr Suwit Yodmanee.

The training, being held jointly by the Thai Diving Association (TDA) and the Phuket Office of Sports and Recreation Development, is intended to give the sea gypsies useful knowledge in safe diving practices and prepare them for possible future work as instructors in the local dive industry.

Yoo Dee Mee Suk (“Good Life and Happiness”) provincial development strategy. The second course will also take place at the Rawai, while the third session will be offered to the Laem Tukkae and Tah Chat Chai sea gypsy communities.

The program is based on the Thai Dive Association’s TDA/CMAS “One Star Diver” training, which could lead to the sea gypsies entering the workforce jobs as dive master assistants.

Such a development would ease the lack of qualified local instructors in the dive industry, which has come under attack several times in recent years as being too dominated by foreigners.

Dr Suwit told the press after the opening ceremony that the project was not only good for the sea gypsy community, but also for the province and the nation.

“Before, Thailand had to send some 300 to 400 million baht overseas annually so that divers could be certified by an overseas association [PADI], but now we can certify divers by ourselves. This course will help expand career opportunities for sea gypsies beyond fishing,” he said.

Dr Suwit pointed out that Phuket’s tourism industry continues to fare well, even though it is the middle of the low season.

“My ministry and the Tourism Authority of Thailand (TAT) have many tourism promotion activities throughout the year. I think the income generated by tourism this year will be better than last year,” he said, adding that the emphasis will remain on attracting more “high quality” tourists.

The strengthening of the baht in recent months has not had much of an effect on Phuket tourism because the island remains one of the world’s most desirable tourist destinations, he said.

Promchote Traivate, head of the Phuket Office of Sports and Recreation Development, said the five-day training the sea gypsies are undergoing will include theoretical and practical training, including how to avoid decompression sickness.

The condition is common among sea gypsies, many of whom descend to the sea bottom to fish without using conventional scuba gear. Instead, they have oxygen pumped through an air hose from a boat on the surface.

The course will also cover safety aspects such as emergency first aid and how to calculate safe diving times under various conditions.

Many private companies had donated equipment and services to support the training, funding for which was approved by the Phuket Governor, K. Promchote said.

The TDA will encourage its members to employ any sea gypsies who pass the course, he added.

“They must pass an exam to become a dive master assistants, but if they do they will get the chance to gain work experience. Additional training that could eventually lead to them becoming full dive masters in the future.

“The TDA will provide assistance throughout. When they start work they will get a wage and enjoy medical coverage though social security, which is better than the 30-baht healthcare plan they currently rely on,” he added.