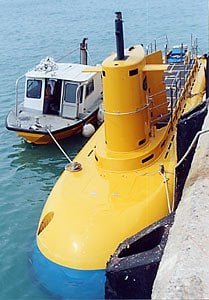 AO MAKHAM: Phuket’s first tourist submarine arrived at the Phuket Deep Sea Port last night after a one-month journey on a cargo ship from Florida. The DS-48 submarine, bought by Phuket Submarine Co Ltd, is the first tourist submarine in Thailand. It will be ready to carry passengers on underwater tours around Koh Dok Mai around the end of this year. Panu Maswongsa, Director of Phuket Submarine Co, told the Gazette that the submarine will be moored at the Phuket Deep Sea Port for a few weeks while customs procedures are completed. After that, the company will spend the months before the launch of the tour service training its staff.