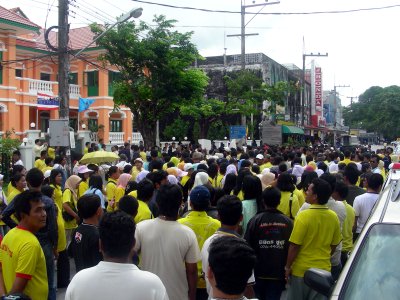 PHUKET CITY: All of the operators running tours in Phang Nga Bay – some 500 of them – staged a peaceful protest at the TAT Southern Region 4 Office this morning to demand that the Ministry of Natural Resources and Environment reconsider its plan to double entry fees for national parks with effect from September 15.

Police blocked off a section of Thalang Rd to accommodate the protesters, who represented a variety of companies and tourism industry associations from Phuket, Phang Nga and Krabi provinces.

Their main concern is that the scheduled entrance fee hike will damage their livelihoods by causing a decline in the number of tourists using their services to visit the parks.

The entry fee for foreigners is slated to rise from 200 baht to 400 baht for all national parks.

For Thais and foreigners with residence permits or work permits, the entry fee will also double, from 20 baht to 40 baht, except with regard to the Surin Islands and the Similans, Ao Phang Nga Park, Ang Thong and Koh Tarutao. In those places the price for Thai visitors is slated to quadruple, to 80 baht a head.

“We don’t want this price hike because it will really hurt our business and cost a lot of jobs,” he added.

Many tour operators have already begun to change their itineraries as a result of the Ministry’s plan, he noted.

Korsem Fongla-ae, owner of a souvenir shop on Koh Panyi in Ao Phang Nga National Park, said the rise would not only hurt local businessmen like himself, but would also anger foreign tourists by making them feel they were being taken advantage of.

” I already have fewer customers buying goods at my shop. When the price hike goes into effect, I may have to close it down altogether,” he said.

A highlight of the protest came when Sarayuth Mallam, Deputy Chairman of the Phuket Tourist Association, handed an official letter of complaint to TAT Southern Region 4 Office Director Suwalai Pinpradab, who agreed to deliver the protesters’ demands to Natural Resources and Environment Minister Yongyuth Tiyapairat.

K. Sarayuth revealed the demands contained in the letter. These were that the price hike be canceled, with entry fees staying at the current rates or, failing that, that public hearings be held to give local business operators a say in what the new fee should be; and that entry fees reflect demand more closely, being higher for the most popular sites and lower for others.

“The problem is that when the number of tourists decreases, the local economy will lose money and jobs. That’s why we are calling for the entry fees to be kept at current rates,” he said.

Just over an hour after the protest began, the protesters shouted “Row cheua Tor Tor Tor tham dai!“ (We believe the TAT can do it) three times in unison before disbanding.

They will give the Ministry one month to reply favorably. Failing that, organizers said, there will be more protests.