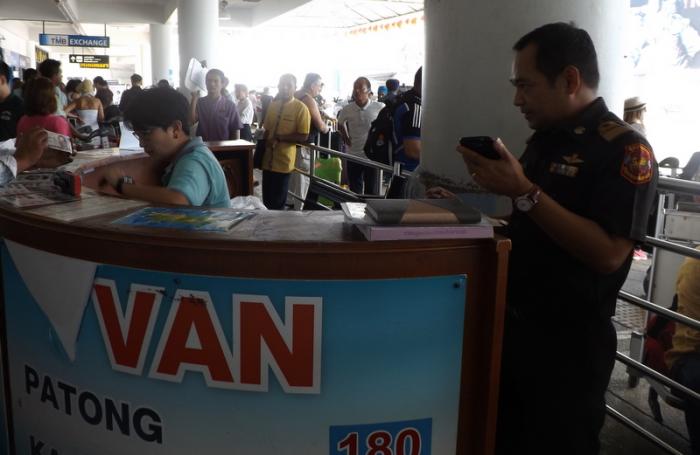 PHUKET: Phuket taxi drivers are facing tough new regulations and harsher punishments in a renewed effort to prevent them from overcharging and cheating customers.

The new regulations are aimed predominantly at taxi drivers based at Phuket International Airport, where cabbies are frequently accused of refusing to turn on their meters, overcharging and making unwanted diversions, said Jaturong Kaewkasi, chief policy adviser for the Phuket Land Transport Office (PLTO) on Wednesday.

“First-time offenders will be charged a 1,000-baht fine and face a seven-day suspension. Those caught a second time will be permanently banned,” said Mr Jaturong, the chief policy adviser for the Phuket Land Transport Office (PLTO).

“We have had a number of customer complaints about the matter recently, so we decided to conduct a meeting with airport officials to resolve these issues,” said Capt Pongjak Uraiman of the Royal Thai Navy, who is the National Council for Peace and Order’s (NCPO’s) representative responsible for Phuket International Airport security.

“All airport taxi drivers are required to sign a memorandum of understanding (MOU) accepting that they agree to the stated punishments if they disobey the regulations,” Capt Pongjak said.

Three main regulations covered in the MOU are:
1. Taxi drivers must dress appropriately.
2. No stops without customers’ permission or taking longer routes to charge a higher fare.
3. Taxi drivers must always keep their meters switched on.

So far, one taxi driver in the Airport Limousine and Business Service Co-operative has been fined 1,000 baht and had his license suspended for one month for failing to take his passengers to their final destination (story here).

“The MOU will help the PLTO as well as the NCPO by granting the authority to take action against these drivers, instead of leaving this responsibility entirely up to the airport management,” said Mr Jaturong.

Part of the improvement plan includes the addition of 122 taxi ranks to be set up around Phuket in order to reduce disputes and make it more convenient for passengers to get taxis, Mr Jaturong said.

“At this stage, we have scouted various locations for the taxi stands and are working with relevant authorities to push this project through as soon as possible,” he said.

“Currently there are about 370 metered taxis and more than 4,000 green-plate taxis on the island. I think the taxi stations will help balance out this number. I believe it is a win-win solution for both taxi drivers and passengers.”

Mr Jaturong admitted that he could foresee potential problems with taxi stands.

“I cannot promise that the process will be trouble-free as there are a lot of taxi drivers who are all dependent on this income. We have set rules in the past without being able to eliminate the problem entirely,” he said.

“We have planned as best we can, but it is important that drivers learn to obey the rules as well.”

Mr Jaturong added that besides law enforcement by authorities, it is imperative for the airport management team to take action and assume responsibility as well, as they are the ones who hire taxi drivers to begin with.

Complaints and queries about taxi services can be made by contacting the NCPO airport station. Tel: 076-351 551 or 1584.