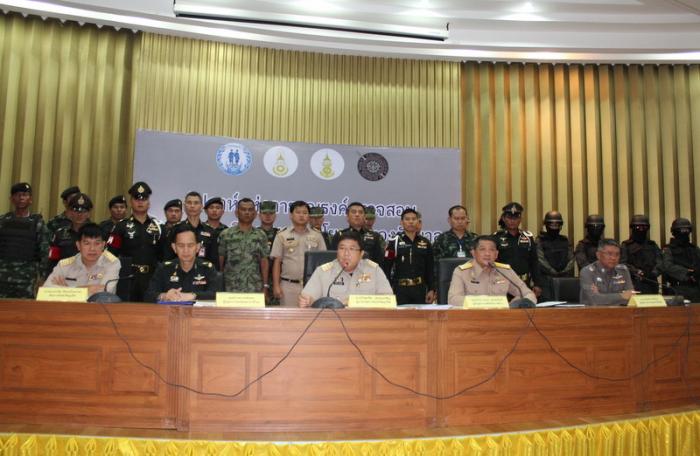 PHUKET: Five of Phuket’s most influential lawmen met at Phuket Provincial Hall this morning in order to discuss what they named as the top five issues plaguing the island.

“We have been discussing these issues among ourselves for a while now. I have ordered the district chiefs to collect information from their areas regarding lawbreakers in these five areas. Once we identify the culprits and collect enough evidence, we will immediately take action against them. It doesn’t matter who they are – government officers, local officials or members of the mafia. Everyone must face consequences under the law,” said Governor Chokchai.

“Even though some officials, including myself, may be new, it is important for everyone to know that we are actively working on these issues. Those who are involved in illegal activities should stand warned – stop now, or face charges,” he added.

“We are strictly going to control the operations of night entertainment venues that run overtime. As for the culture of accepting tea money, I am confident that no high level officials are involved in it. We are investigating it and aim to instill confidence regarding our management capabilities to both tourists and locals,” he said.

Gen Akom added that ensuring the safety of everyone in Phuket, whether locals, tourists or expats, is a prerequisite to tackling these issues.

“I think vigilance by the public is the best way to keep an eye on all illegal activities. It works even better than CCTV cameras. If people start reporting illegal activities, it will make our work easier and more efficient,” said Gen Akom.

“I have a list of nine names of people who are allegedly involved in asking for or accepting tea money. We haven’t been able to act on it yet due to lack of evidence, but we are currently keeping a strict eye on these individuals,” he added.

V/Adm Suraphol, Gen Teeraphol and Mr Banjerd echoed the governor’s sentiments, adding that their teams were prepared to handle any contingencies during the upcoming high season.