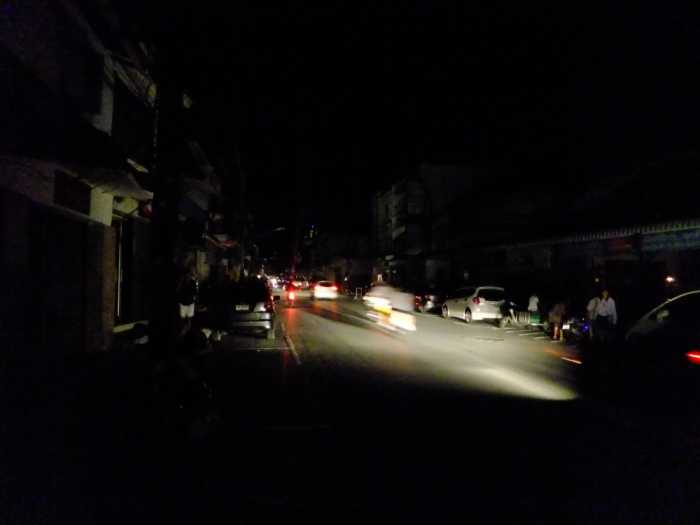 PHUKET: Three men ambushed a British national and his wife as they slowed their motorbike at a speed bump in northern Phuket last night.

“My wife and I were attacked and knocked off our motorcycle at 9:00… on the road that connects Sri Soonthorn Road with the Alan Cook Cricket Ground,” Iain Richardson told the Phuket Gazette.

“Three teenagers were waiting by the side of the road, acting as if they had a problem with their motorcycle.

“When we slowed down for the speed bump, one of them rushed out and smacked me over the head with a large stick. We came off the bike. My wife tried to go for the attacker and was hit on the arm. By the time I got up to chase them, they had run off.”

Mr Richardson suffered a perforated eardrum and his wife has bruising on her arm from the incident.

“[I have] no idea what their motive was… Luckily, we were wearing helmets,” Mr Richardson said.

The Richardsons filed a complaint with the Thalang Police, who are now searching for the attackers, confirmed Thalang Police Superintendent Sirisak Wasasiri.

“This is the first case of this kind that I’ve seen since I was stationed here. At this stage, the victims could not describe the teenagers. However, as soon as we collect enough information we will track them down.

“At the same time, we will be looking at what safety measures can be implemented to prevent attacks like this from happening in the future.”

Police have contacted the Sri Soonthorn local government to report the lack of lighting and CCTV coverage in the area.

“They need to consider applying for a budget to improve safety at that location.”

His warning was echoed by Mr Richardson.

“I think people need to be aware of the dangers of driving a motorcycle on small roads at night, and be on the lookout for suspicious groups of teenagers, especially in the Sri Soonthorn area,” Mr Richardson told the Gazette.

Smoke on the water: Boat operators warned of Phuket haze