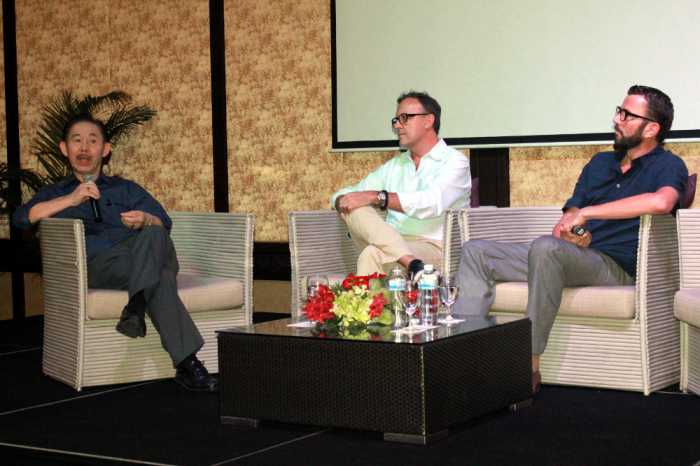 PHUKET: Is Phuket lacking identity? What makes the Phuket brand? How can the island benefit from the current winds of change? These and other issues were addressed at the September 12 AMCHAM forum, titled “The New Phuket”.

The latest installment in the AMCHAM seminar series took place at the Angsana Laguna Phuket ballroom and saw a number of speakers, both on stage and in the audience.

“During our seminars we try to focus on things that are critical to the issues at hand and what we are talking about today is the ‘New Phuket’, the aftereffect of the government issues, the beach cleanup and everything else. We want people to express their opinions, explain what’s happening in the business community here,” explained Bill Barnett, managing director of C9Hotelworks and property columnist for the Phuket Gazette.

To showcase how dramatic the recent changes on the island have been, Scott Gorsuch of Leisure Design Group opened the forum with a ‘before and after’ photo presentation depicting Phuket’s beach cleanup, and went on to draw comparisons between travel agency brochures and the reality tourists actually face on the ground here.

David Keen, founder and CEO of QUO, a global branding specialist agency, took to the stage to ask if Phuket is really one of the largest resort destinations in the world that has virtually no identity. This blunt question, followed by examples of successful destination branding campaigns such as “Love NY”, “Pure New Zealand” and “Incredible India”, sparked a lively discussion among the 200 representatives of Phuket’s tourism and hospitality industry present at the conference.

“Phuket has an identity that’s driven reactively and not proactively. I believe that the time is now, if not already a little bit late, for the stakeholders in the industry to take brand Phuket and define it, so Phuket gets the brand that it deserves. We want to lay foundations for the future,” concluded Keen.

MORE THAN WORDS
The culmination of positive energy and stimulating ideas aired during the forum resulted in the decision to create a private enterprise council comprising leaders in the tourism industry in order to develop a single voice and brand identity for Phuket.

“[It] all starts with the initiation from us here. People will not listen to just one, single person,” said Wichit Na-Ranong, owner and managing director of the Indigo Pearl resort and one of the founding fathers of Phuket’s tourism industry.

The final outcome of the discussion at the forum was to reactivate the Phuket Hotels Association.
“This industry is too big to go backward. If tourism doesn’t exist on this island, what else is it going to be?” asked Mr Barnett.

“We want to give tourism one voice. There are other places that this has worked. The Bali Hotels Association gave a powerful voice for tourism. And Bali went through tough times – two bombings – but whenever there was a crisis, there was one voice people could go to and ask: ‘What is happening with tourism?’.”

The new council will be designed to give a unified message to tourists who are interested in what will happen next and what Phuket will be like when they arrive for their holiday.

Anthony Lark, vice president of business development for the Montara Hospitality Group and panelist at the forum, backed the move to establish a unified voice and brand for Phuket.

“The urban-resort-mass-tourism market can co-exist with people who want to take out yachts, stay at private villas, eat at five-star restaurants and live a boutique lifestyle. Other places have done it. But it cannot be done without a representative body who looks at the interests of all of the stakeholders,” said Mr Lark.

“Thailand has the opportunity to redefine itself. This moment of peace, the moment of calm that’s been imposed upon it by the military government, gives us the opportunity to define the Thailand of the future, and Phuket is an absolutely fundamental, critical part of it,” concluded Mr Barnett.

Additional reporting from the forum by Isaac Stone Simonelli

Tax havens only for the rich