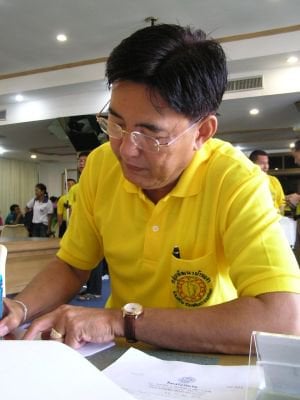 PHUKET CITY: A third party entered the Phuket City Municipality race this morning, on the final day for registration. The Pattana Baan Rao (“Develop Our Home”) Party is led my mayoral candidate Thanapong Kho-udom, 53, who explained the late entry: “We came to register on the last day because we didn’t want to compete [for the number 1 on ballot sheets]. The number 3 is good for us; people will know us from this number.” The two mayoral candidates already registered are Prawat Suwannadithakul of the Chao Baan Sarng San Party and Somjai Suwannasuppana of the Khon Noom Party. K. Kho-udom explained that the agenda of the Pattana Baan Rao Party is based “on the wishes of the people”, and includes improving public utilities, raising educational standards, building public parks and developing tourism in the city while at the same time retaining local culture and traditions. He stressed that these are long-term goals. He said that since Phuket City Municipality covers only 12 square kilometers “it should not be difficult for us to campaign for votes by knocking on doors and introducing ourselves”. He promised a non-confrontational campaign, saying, “We are a new party, and we don’t like mud-slinging. We’d rather simply explain our policies to develop the city. It will then be up to the voters to make their decision.” He added, “We know Phuket City very well as we have all lived here our entire lives and have seen what certain policies can do. We will be a new choice for people. We are confident we can work for the people – that’s why we are here today.” The election takes place on April 4.