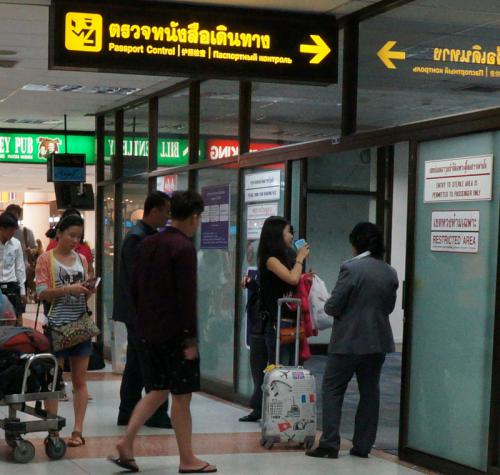 PHUKET: The six stateless asylum seekers who have been housed under guard at Phuket International Airport for over a month may soon be leaving the island.

Malaysia has agreed to accept the four Syrians in the group, and the two Lebanese men will be sent to Bangkok, said Prapansak Prasansuk, Chief of Immigration at the airport.

How the men, said to be fleeing violence in their countries, arrived in Phuket on a flight from China without passports is still not entirely clear to Immigration officials.

Their story began sometime in December when they arrived in Bangkok. They next appeared on immigration radar when they boarded a Beijing-bound China Airlines flight in Phuket on January 13.

Their ultimate destination was Sweden, where the men all say they have relatives, Mr Prapansak told the Phuket Gazette. They planned to transit in China and fly on.

However, the forward direction of their trip ended abruptly in Beijing, where Chinese Immigration officers declared their passports to be fake, seized them, and ordered China Airlines to return the men to Phuket, said Pensirit Pantachinatat, Deputy Chief of Immigration at the airport.

International transit passengers at Beijing Capital International Airport must pass through immigrations, but the seizure of the passports has perplexed immigration officers here.

“We’d like to know why Immigration in China didn’t arrest them if they believed their passports were fake,” said Ms Pensirit.

“And if they just wanted to expel them, why didn’t they return their passports to them?” she added.

Once the six arrived back in Phuket, they could not be allowed into the country without passports.

“We did not want to send them back to Syria, because it is a country at war,” said Col Prapansak. “But without passports, we couldn’t send them anywhere else either.”

The men were housed, under guard, at the airport while Immigration officials sought a way out of the dilemma.

“China Airlines is responsible for them, but we are trying to help them out,” Col Prapansak said.

China Airlines contacted the United Nations High Commissioner for Refugees (UNHCR) to ask for help last month, and UNHCR officials were expected to send staff to Phuket to confer with the men, said Col Prapansak.

At some point, UNHCR said they could not come to Phuket and asked China Airlines to send the men to Bangkok, where they have an office.

“We agreed that China Airlines should take them to Suvarnabhumi Airport to meet with the UNHCR. Thai Immigration there can also better accommodate them, because they have more complete facilities,” said Col Prapansak.

China Airlines, who Col Prapansak says has been paying the bill for the men’s room and board at the airport, agreed to pay to transport the men to Bangkok.

“We have received informal confirmation that Malaysia will accept them,” Col Prapansak told the Gazette.

“We are waiting for the official documents, and expect them to arrive in 2-3 days.”

Once there, UNHCR officials and Chinese immigration will work together to find a solution for them, explained Col Prapansak.

As many as 500,000 Syrians have been displaced by the civil war in their country, the United Nations says.

A Bangkok departure date has not yet been confirmed.