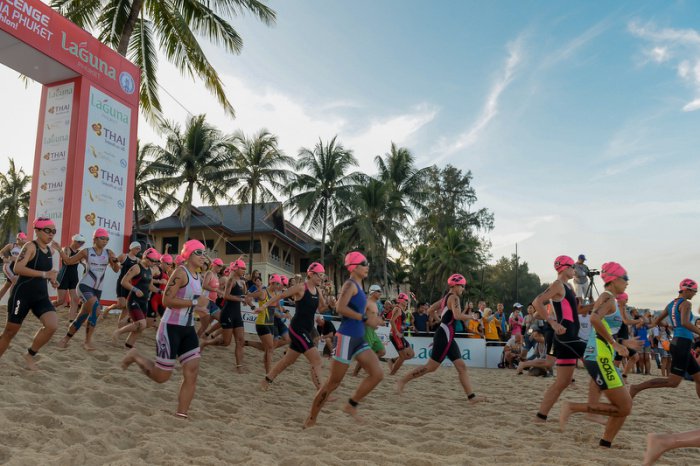 This year’s triathlon will celebrate its 22nd year, while simultaneously welcoming the return of the Challenge Laguna Phuket on Sunday, November 29.

During the week-long, multi-sport event, Laguna Phuket will be a beehive of activity, with athletes and guests taking part in social activities, training sessions and competitions.

Tri-Fest has proved a popular attraction for international athletes who are eager to sample the delights of Thailand while rubbing shoulders with the likes of Swiss Olympian Ruedi Wild, professional triathlete and previous Laguna Phuket Triathlon winner Massimo Cigana (Italy), professional Australian triathlete and multiple-record holder Luke McKenzie and fellow Aussie and world champion Melissa Hauschildt, to name a few.

The crowd will also be thrilled to see the return of Australia’s Belinda Granger, the darling of the triathlon world who retired from her pro career at the 2014 Challenge Laguna Phuket Tri-Fest.
Ms Granger will participate in the 2015 Challenge Laguna Phuket as the race’s ambassador, bringing along her following triathletes to experience the Tri-Fest that has been dubbed ‘The Race of Legends’, and in which she herself is a star, achieving numerous podium finishes, including two champion titles, in 2008 and 2010.

Massimo Cigana, the Tri-Fest’s first four-time champion, will try to defend his title alongside his fellow Italian pro Alberto Casadei, with whom he made history at the triathlon last year as they crossed the finish line together and became the event’s first dual champions.

To date, a combined 1,300 athletes have signed up for the two main races. Registration for the Tri-Fest is open until November 15, with an estimated total of 1,500 athletes expected to participate.