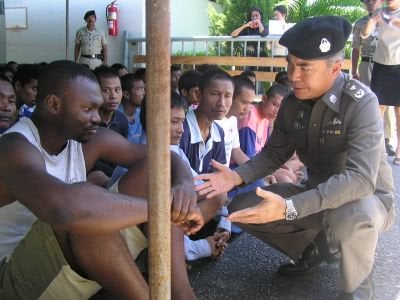 PHUKET CITY: The Phuket Immigration Office has arrested 766 illegal workers, mostly from neighboring countries, in the first four months of this year as part of a concerted round-up. Of those arrested, the overwhelming majority – 738 – were Burmese, with the remaining 28 coming from Laos, Cambodia and other countries. Pol Lt Gen Dr Chanvut Vajrabukka, Commissioner of the Immigration Bureau explained at a press conference on May 9 that the Labor Ministry will begin a new round of registrations of foreign laborers on June 15. When the registration begins, he said, “There will be a policy to ease off on arrests of illegal laborers. So until then we have to make arresting them a priority.” He added, “There are many aliens waiting along the borders with Thailand for the chance to come and register to work in Thailand.” Satra Bunyatantrapiwat, President of the Phuket Business Operators’ Club, arrived before the press conference and presented Gen Chanvut with flowers. He told reporters that there is a lack of low-skilled laborers in Phuket. He estimated that about 20,000 laborers from neighboring countries now live in Phuket, some legally, some not. “We have to hire foreign labor because Thai people don’t do these kinds of jobs – working in fisheries, in agriculture or as coolies. I’d like to propose to the Commissioner of Immigration that he ease the suppression of illegal foreign labor,” he added. But Gen Chanvut responded, “Business people say there is a lack of foreign low-skilled labor. But [given the choice] between the benefits to a group of [business] people and the benefits to the country as a whole, I think Thai people will choose the latter.” He did not explain what the benefits to the country might be. The General also talked about government policy on tourists arriving in Thailand from countries that have been granted visa-on-arrival status. Allowing people from these countries to come into Thailand “can mean trouble”, he said. “For example, some wanted criminals try to sneak in as tourists.” As a result, he said, “We have to check their backgrounds strictly and sometimes it takes time at the airport Immigration desk – though it’s not that slow.”