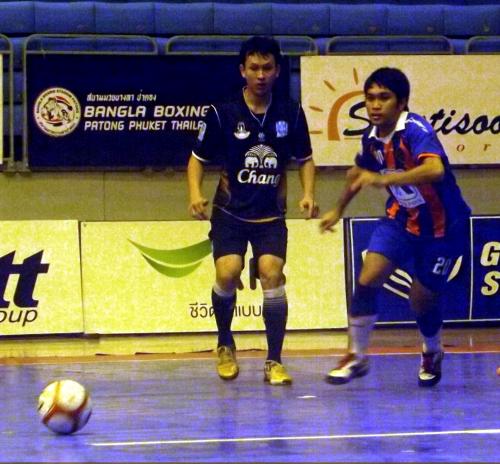 PHUKET: The Pearl of the Andaman, Phuket United, succumbed 2-3 to a stronger Thai Port Futsal Club on Saturday night in Phuket Town.

The match, Phuket’s 22nd and Thai Port’s 23rd in the 30-fixture GMM Thailand Futsal Premier League (TFPL) 2012-2013 season, was played in front of about 800 fans at the Saphan Hin Indoor Sports Complex.

Thai Port – owned by the Port Authority of Thailand – broke the ice early on with a goal in the first minute by Brazilian veteran Thiago Mora de Oleveira.

After that, it was mostly Phuket who controlled possession, ever determined to find the equalizer.

That goal finally came in the 17th minute with a beautiful strike from the top right of the area by Phuket’s leading scorer, Jackson Santos.

The score remained 1-1 going into half time.

The visitors took the lead again 7 minutes into the second half with a goal by Thanapon Wongsam-aang.

Phuket equalized again five minutes later with another beautiful strike by Santos from the right side, scoring his 25th for the team this season.

With the score level at 2-2, Phuket picked up the offensive pressure, and Thai Port’s defense started to show signs of weakness.

However, Thai Port’s keeper Prakit Daan-khunthot took everything that came his way, and did not make any mistakes.

In the 37th minute, Thai Port sealed the game on a quick counter attack after Worin Romnee capitalized on a loose ball mid court, catching Phuket’s keeper Parinya Pandee out of position and sending the ball to the back of the net.

Despite a commendable power play attempt, Phuket were not able to equalize for a third time.

After the match, Thai Port Thai veteran Wutichai Thin-tawee told the Phuket Gazette that his side were quite pleased with the result.

“We played to our plan, and that was to play strong defense… In the second half of the season, we lost a lot of our good players who went to teams like Chonburi and Phuket [referring to Piyapan Rattana]] so we’ve just been working on getting our new players to get used to the team.”

Another Thai Port veteran, their only foreigner, Thiago Mora de Oleveira also talked to the Gazette after the match.

“This season has been a lot harder than previous seasons due to the hectic scheduling of up to three league games a week, not to mention our tough FA Cup schedule. We were tired from the trip to Phuket, and I was also worried because Phuket has three Brazilians.

“While I often knew which tactics they were using, a lot of my team mates didn’t, so it was difficult to adjust. In the end we did okay.”

Thiago, who first came to Thailand to play 11-a-side football is playing his fourth season for Thai Port Futsal Club.

Phuket’s star Brazilian Jackson Santos also spoke to the Gazette after the match.

“Although I’m having a really good season with 25 goals, I’m not so satisfied because our team has not been doing so well. We’ve been real tired from travel and working hard but have a lot to improve on if we are going to meet our goal of finishing in the top five of the league,” he said.

Phuket have eight more games this season to meet their goal of finishing in the top 5.

Their next two matches this week will be on the road, starting this Wednesday, when they will play 13th placed Samut Sakhon.

With a 4pm kickoff, the match will be played at Bang Khun Thien, just to the west of the capital.

Following that match, Phuket will stay in Bangkok to play 11th placed Samut Songkhram on Sunday (March 24) at the Fashion Island Futsal Arena with a 12pm kick off.

Phuket return home to play 6th placed Nonthaburi on Wednesday, February 27, after which they will take on 5th placed Surat Thani on Saturday, March 2, also at home with a 7pm kickoff

Other TFPL Results this weekend: