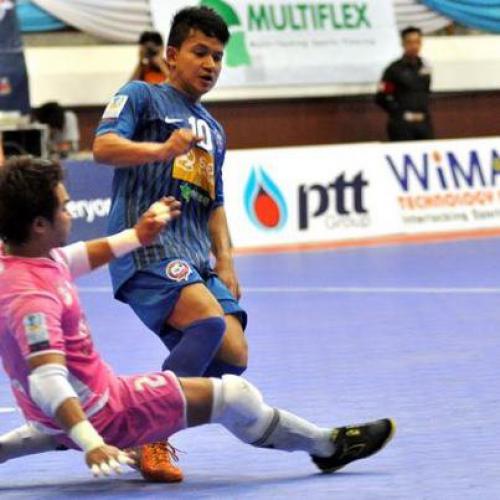 Played at the Chon Kanyanukoon School in the heart of Chonburi city, the match was both side’s 16th of a 30-fixture season.

Going into the game, the Chonburi ‘Sharks’ were ranked first in the league with 43 points from 13 victories, one draw and a loss. Meanwhile, the Andaman Pearl were in fifth place with 27 points from their nine wins and six losses.

And though the teams were closely matched when they met two weeks ago in Phuket, this encounter would prove to be a different story.

No doubt tired from travel and intense FA Cup competition, having narrowly lost their quarterfinal match to Lampang United two days earlier, Phuket were vulnerable without their home support.

Chonburi broke the deadlock two minutes into play. Winger Kritsada Wongkaeo took a strike with the full force of his right foot, a shot which was blocked by Phuket’s keeper and deflected towards Anukul Mini, who followed up to score.

Moments later, Phuket’s Nattapong thought he had equalized with a piercing strike from 12 meters out, but Chonburi’s keeper’s sharp reflexes ensured a fantastic save.

Suphawut looked to double the Sharks’ lead in the 11th minute, but his strike was slightly off target.

Minutes after that, however, his team mate Tanathon Santhanabrasit didn’t miss, making the score 2-0.

Two more Chonburi goals in the final minutes of the first half – by Nattawut Madyalan and Kritsada Wongkaeo – extended the home side’s lead to 4-0 by half time.

Four minutes into the second half, the shark feeding continued.

Home heroes Supawut and Kritsada showed fans why they headlined the national squad at the Futsal World Cup last November in Bangkok.

Boxing out the Phuket defender in the middle of the court, Supawut skillfully laid the ball off for Kritsada to score at the far post, bringing the score to 5-0.

Down but not out, Phuket picked up the attack, and the Pearl’s new signing Kitipong Sonsuwan and Anurak Phetluan narrowly missed scoring chances in the 26th and 29th minutes.

Chonburi’s goalkeeper Dung Puak-un was having a good day, however, he might have maintained a clean sheet, but Phuket’s Nattapong finally found the back of the net in the 34th minute. Neither side was able to score again in the remaining six minutes.

Despite the defeat, Phuket retained their fifth place standing.

After the match, Assistant Coach Tum wrote the following message to fans on Facebook:

“I apologize to all fans for managing the team to lose [against] Chonburi. In any case, I’d like to compliment our team spirit in fighting to the last second… I take responsibility for failing. I would like to thank you and hope that you will continue to give us a chance and reinforcement in the future.”

Licking their wounds, Phuket continue on the road, heading to Isaan to take on Sipathum Sunrise Si Saket FC on Wednesday, January 30.

To be played at Rajphat University, Si Saket, the match will kickoff at 6pm.

After that, Phuket will return to the capital to play 2nd place Bangkok FC this weekend.

The Andaman Pearl’s next home match will be on Wednesday, February 6, against CAT FC.

Transferring from Thai Port FC, Piyapan was part of the national squad that finished as runners up in the Asian futsal championship last year.

Kitipong (transfer from CAT FC) and Thawit (from Bangkok FC) were part of the national squad that played in the last FIFA Futsal World Cup in Bangkok.

Other TFPL results over the weekend