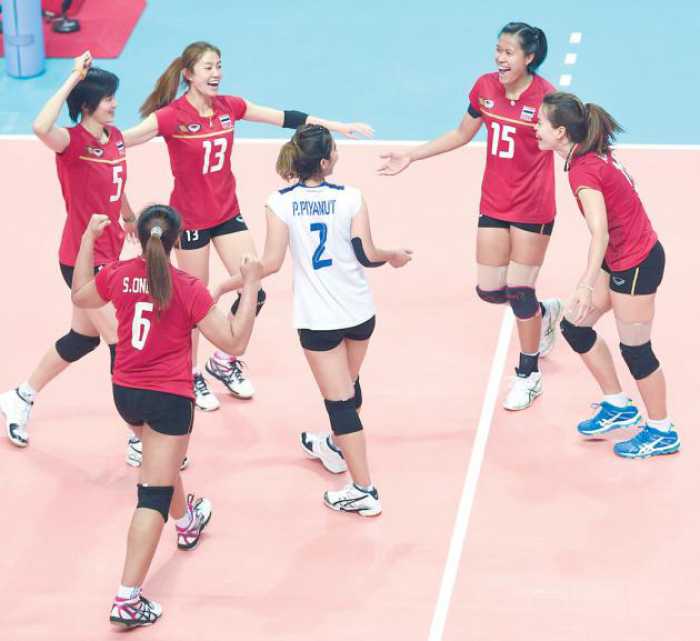 PHUKET: Thailand suffered mixed fortunes at the Asian Games yesterday when the women’s volleyball team made history by clinching a bronze medal, the first ever for the country at an Asiad, while the men’s soccer team ended fourth – for the fourth time.

The Thai spikers made the country proud after ending the 48-year Asiad medal drought following a hard-fought win over Japan in the playoff for third at the 17th Asian Games. The match was played at the Ansan Sangnoksu Gymnasium.

The exceptional 25-17 25-22 25-23 victory handed Thailand a consolation bronze, their first-ever medal since their debut in the 1966 Asian Games on home soil. At that first contest, the host side finished a disappointing fifth place.

Since then, they have failed to make a mark in the quadrennial sporting event. Their best performance at an Asian Games was fourth place – on three occasions – in 1986, 1998 and 2006 in Tokyo, Bangkok and Doha respectively. At the previous episode in Guangzhou, China, four years ago, the Thai spikers left the venue in despair following a below-par fifth-place finish.

After the win over Japan’s second-string team to claim bronze yesterday, the spirited Thai team carried a Thai flag while dancing cheerfully in a circle and hugging one another. Thai fans inside the gymnasium stood up and applauded loudly, some shouting “Thailand, Thailand” and others in tears.

On social media, thousands of likes were given for posts written to praise the Thai spikers’ gutsy display. Hundreds commented that they would still love players in this volleyball team even if they will retire in the near future.

“We did our best,” Thai head coach Nattapon Srisamutnak commented after the match. “Although the medal we won is not gold, it’s our great pride because the bronze is Thailand’s first-ever medal at an Asian Games.

“The win is a relief after our concern that we might return empty-handed as we had targeted earlier to win a medal no matter what colour.”

Team captain Wilavan Apinyapong said an attacking shot from their rivals hit her mouth and caused her to lose blood and temporarily blur her sight.

But she added: “Great that we won finally, although it’s just a consolation bronze. We feel greatly proud with it, as this may be the last Asian Games for many players in our team. Most of us are getting old and we have to leave with a success before we say goodbye to the national team.”

On the soccer field, the Thai team failed to go one better than their previous best result in the continent’s sporting tournament, going down 1-0 to Iraq in the third-place playoff.

Iraqi captain and striker Younus Mahmood grabbed the solitary goal for the Mideast side, which consigned the Thai team to finish in fourth spot – as it did at the 1990, 1998 and 2002 Games.

The Thais, though, will return home with the heads held high after producing a series of impressive performances during their Asian Games campaign.