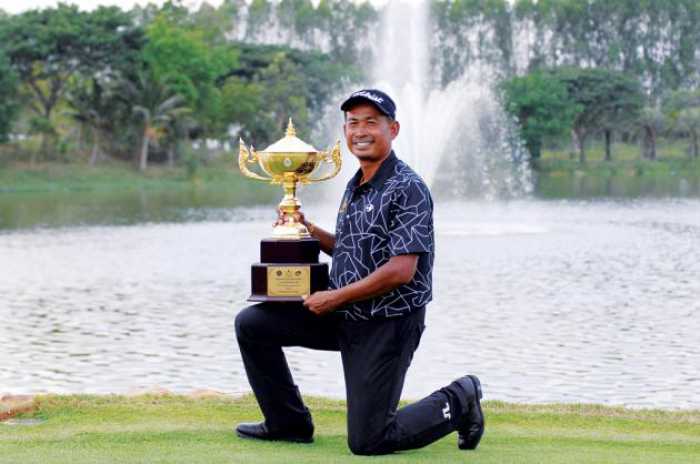 A stroke ahead of the current No 2 on the Asian Tour Order of Merit ranking, the 47-year-old Thai sank a 10-foot birdie putt on the finishing hole to finally lay his hands on His Majesty the King’s trophy. His rival had desperately hoped to make an eagle putt and that Thaworn would miss, but it was not to be.

The Thai veteran finished with a round of 67 for a 20-under 268, beating a disappointed Lahiri and Australia’s Andrew Dodt by two strokes in the US$500,000 tournament. The Bangalore-based golfer, after watching Thaworn make the victorious putt, not only missed an eagle putt but also an easy birdie and had to be content with a 70 and an 18-under 270 tally.

Thaworn said: “I had to make that birdie putt to win. If there was a play-off, the chance would have been less for me. There was a huge pressure on me and I had to take deep breaths several times before I hit that shot.

The two-time Asian Tour No 1 became the second Thai to lift the trophies of Their Majesties after Prayad Marksaeng, who achieved the feat last year. His victory was the fourth time in a row the title has been won by a Thai – Udorn Duangdecha in 2011, Arnond Vongvanij in 2012 and Prayad in 2013.

“I was determined to win this tournament as I always dreamed of having this trophy in my cabinet. But it depends on destiny too. I waited all year long to come with my best putts and feel thankful that it has come this week,” said Thaworn, whose record of 18 wins is the highest on the Asian Tour.

Thaworn took home a cheque of US$90,000 and will play next in an invitation event in Dongfen, China.

Lahiri was disappointed not to win in Khon Kaen but hoped to improve his world ranking. He gave credit to the Thai for putting up a magnificent fight.

“I wasn’t at my best today as I was really struggling on the greens. Thaworn was pure magic on the greens. Off the greens, he played fantastic on the front nine and on the back nine I had my chances and I just didn’t take them. I just missed way too many putts and it was disappointing to miss a short one on the last and that is going to hurt my world ranking,” Lahiri said.

Dodt shot a 67 with seven birdies against two bogeys. “I’m really happy with the result. That’s a nice feeling to know I’ve also secured my card on the Asian Tour,” the Australian said.

Teenager Danthai Boonma made an impressive debut as a pro, carding a 69 for a four-day total of 15-under 273, which saw him tied for fourth alongside Australia’s Kalem Richardson and American Paul Peterson, who both shot 69 yesterday.

“I’m so excited to finish high in my first pro tournament. I just hoped to make the cut but I happened to play so well in the first round, which pushed me to do even better,” he said. The 18-year-old Thai is now looking forward to an invitation to play in the Thailand Golf Championship next week.