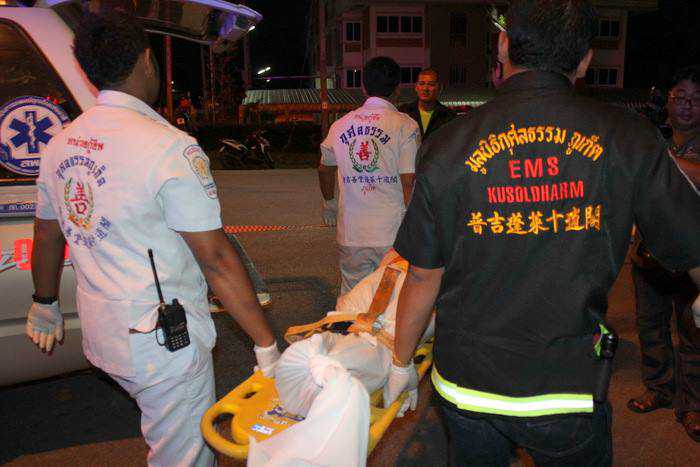 PHUKET: Police are searching for six men wanted for shooting dead a 15-year-old on the streets of Phuket Town last night in an attack that began in front of the Governor’s House on Narisorn Road.

Police arrived at scene, near Ministry of Finance Phuket Office, shortly after receiving a report of the shooting at 11:15pm.

“We arrived to find one man crying beside the body of Sakorn Nitipoj, 15,” said Phuket Provincial Police Commander Patchara Boonyasit.

Sakorn was killed by a single gunshot wound to the torso, Maj Gen Patchara explained.

“The friend [who police declined to name] said he was riding pillion on a motorcycle driven by Sakorn when six men on three motorbikes rode up to them,” he said.

“One of the men fired one shot at them in front of the Governor’s house, but missed. Sakorn rode off, but the six men followed and fired another shot right in front of the Ministry of Finance Phuket Office.”

Sakorn was shot in the right of his body.

Phuket Governor Nisit Jansomwong was not at home at the time, Gen Patchara added.

“He kept riding, then fell off the motorbike and died. His friend, frightened, ran and hid by the side of the road. The six men rode off after the pair fell off their motorcycle,” he said.

From inspecting the wound, police believe Sakorn was shot by a shotgun, perhaps homemade.

“His body has been taken to Vachira Phuket Hospital. Meanwhile, we are hunting down these six men,” Gen Patchara said.

“Although Sakorn’s friend said that he had no idea why the men attacked them, we believe the shooting was motivated by revenge and we are pursuing this line of investigation.”