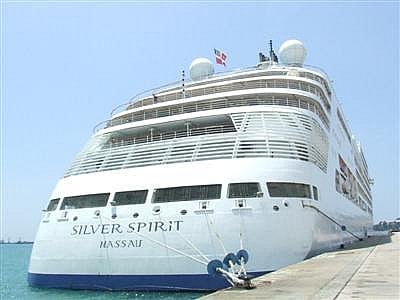 PHUKET: The latest taxi and tuk-tuk blockade at the Phuket Deep Sea Port led to a victory for the drivers, who from today will be given a “50-50 share” of access to disembarking cruise ship passengers.

Many of the 472 passengers aboard the Silver Spirit cruise liner had planned to take half-day minivan tours of Phuket, returning to the vessel before its scheduled departure at 1pm.

Their Phuket experience will not be a fond one, however, as they were not allowed past the blockade of some 200 angry taxi and tuk-tuk drivers.

The drivers were protesting the fact that local tour agents pick up most of the passengers who disembark from cruise ships at the port, leaving them with no work and no income.

“We have discussed this with the tour agencies and local authorities 10 times already over the past year, but still nothing has been done,” Taweesak Jumpada, a local taxi driver at Ao Makham for the past 12 years, told the Phuket Gazette.

Japanese tour operator Osaki Takumi said, “We had four Japanese guests who have booked a half-day round-trip tour, but now they cannot enjoy that as the ship is scheduled to leave at 1pm.”

The passengers are on a cruise from the Malaysian island of Penang to Columbo, Sri Lanka.

One of the tourists, 50-year-old Brazilian Marlove Arauj, said she and her husband were disappointed that their half-day tour had to be canceled.

“I have been to Phuket once before and I was very much looking forward to having another look around,” she said.

Another tourist, 66-year-old Schettle Roland of Luxembourg, said, “This is bad. I came here 10 years ago. I didn’t plan to go inland myself, but I am not sure tourists will want to come to Phuket if they are greeted like this.”

One of the taxi drivers who helped reach the agreement, 50-year-old Narin Kebsup, said he was part of a 160-member collective of local taxi and tuk-tuk drivers.

Drivers wait all day for fares at the port, only to find that their time has been wasted when tour operators send their own vehicles to collect passengers, said the 20-year veteran driver.

As part of the agreement worked out today, tour operators will now have to inform the taxi and tuk-tuk co-op when they plan to use their own vehicles, he said.

The latest blockade was aimed at the management of the Sea Tour travel agency, but the Ao Panwa taxi co-op has shown in the past that they are ready to take on all comers when they feel their interests are at stake.

In June last year a similar blockade was staged to stop US Navy seamen from taking buses paid for by the US military to points in Patong.

It was later reported that US military personnel had been the subject of at least three similar blockades, yet US Embassy staff downplayed the incidents and continued to insist Phuket was a preferred port-of-call for off-duty servicemen.