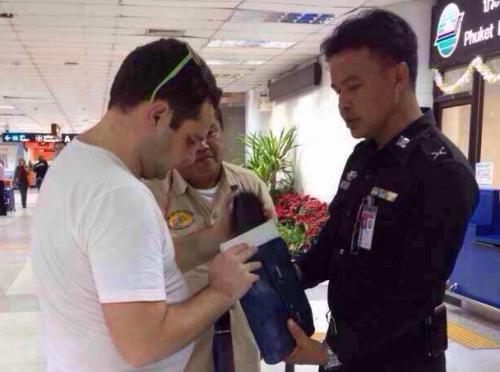 PHUKET: A taxi driver and a tuk-tuk driver yesterday made two tourists very happy by returning over half a million baht and other belongings that had been left behind in their vehicles.

Italian tourist Alfredo De Santi, 37, left a bag containing an iPad, passport, telephone and 500,000 baht in the taxi he took from the airport to his accommodation in Patong.

Mr De Santi called police at about 9:20am, and they contacted the Tourist Assistance Center at the airport.

Meanwhile, Mr De Santi’s taxi driver, Phanom Banbai, 51, of Phuket Mai Khao Sakoo (PMK) Co Ltd, had discovered the bag and was on his way to hand it in at the Tourist Assistance Center.

“When Mr De Santi got the bag back with all his property intact, he was very happy and thanked everyone,” said Tah Chat Chai Police Superintendent Nathapakin Kwanchaipruek.

“He also said that he loves Thailand,” he added.

Shortly afterwards, Karon tuk-tuk driver Prasert Tapkeaw discovered a woman’s purse containing more than 30,000 baht that had been left behind in his vehicle the night before.

“He took it to the Karon Police to ask for help in finding the owner. The police quickly found her and returned the purse the same morning,” Col Nathapakin said.