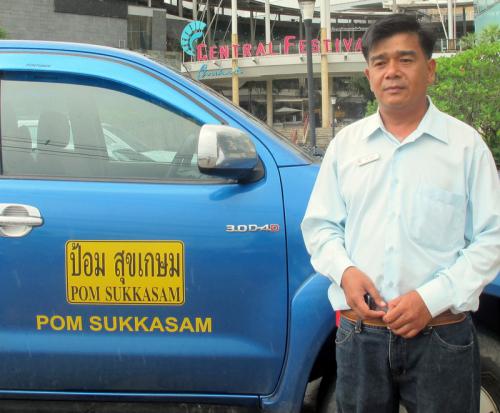 PHUKET: The leader of the Central Festival Phuket taxi group, who stands accused by the Department of Special Investigation (DSI) of queue hopping, told officers not to worry about how he runs the shopping mall’s taxi network.

“This is not a big thing to focus on… I would like to let the DSI know that they don’t need to worry about me taking advantage of my members. We live like brothers. I have never, and will never jump the queue,” Pom Sukkasem said.

Lt Col Somboon Sarasit, head of the DSI’s Bureau of Special Crime Unit 3, explained on Tuesday that he had received reports from taxi operators at Central Festival that Mr Pom was taking advantage of the queuing system.

“Mr Pom took advantage of the other taxis operators by skipping the queue. We learned about this problem after speaking with Central Festival management, Phuket Land Transportation Office officers and members of the taxi group,” Lt Col Somboon said.

The accusations come after Mr Pom returned from court in Bangkok, claiming that the extortion charges against him were not being pursued by the prosecutor (story here).

At that time Lt Col Somboon clarified, “The prosecutor ordered investigators to get more evidence to support the extortion charge. That does not mean the case has been dropped.”

Mr Pom explained to the Phuket Gazette yesterday how the taxi queuing system worked in the past, and why he had more slots than others.

“First off, I have one slot and my wife also has one. But more importantly, we have an agreement with all the members of the taxis that if they need a loan to pay the queuing fee or for something else, they can use their queue spot as collateral,” Mr Pom said.

“All loans, given at zero per cent interest, must be paid back in three months,” He said. “If they aren’t, the driver looses his spot in the queuing system.”

When someone is looking for a short-term loan, Mr Pom says he is usually the person who gives them money.

“However, that agreement is part of our old system, and will not be valid once we, the Andaman Taxi Service Co-operative, become legal,” he added.

The new system will only allow one car per person and only one queue space per car, Col Somboon said earlier this week.

Central Festival Operations Manager Preecha Ritthiratree expressed concern over whether or not the taxis operating at the shopping mall would all be legal by the November 30 deadline.

However, Mr Pom assured the Gazette that there would be no issues.

“The Andaman Taxi Service Co-operative will finish the registration process by November 30, and we will have 100 legal taxis operating at Central Festival at that point,” he said.

Currently, 179 taxis are operating at the mall as part of the group, 100 of which are legal, Mr Pom explained. Of the rest, 29 are in the process of getting their green license plates and becoming legal, the remaining 50 are not.

“Once our co-operative becomes legal, then none of the illegal taxis can service Central,” Mr Pom said.

*It was originally reported that the fee was 1,200 baht a year. The error is regretted.