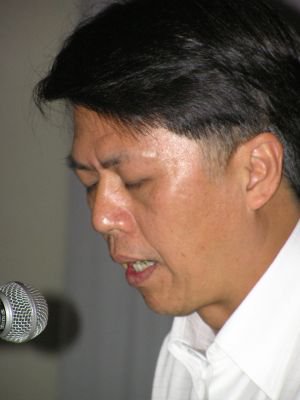 PHUKET TOWN: The outgoing President of the Provincial Administration Organization, (OrBorJor), Dr Prasit Koeysiripong, dropped a bombshell at his farewell media appearance last night when he said he would not be standing as a Thai Rak Thai (TRT) candidate in next year’s parliamentary elections. It had been widely anticipated that Dr Prasit would lead the TRT campaign in 2005 when the governing party will be trying to wrest control of Phuket away from the hands of its three current MPs, who are all members of the opposition Democrat Party. Dr Prasit, 48, who first set up the TRT Cooperation Center in Phuket in 1997, said that he would continue to support the party from the sidelines, but would not stand for election. “In the four years that I have worked for the OrBorJor, I have had to take part in 10 meetings or similar functions every day, which is too much at my stage in life,” he explained. “I have had to make sacrifices by sharing my time between the public and my family. Now it’s time to give something back to my family and me.” “I confirm that I shall not stand in any political election,” he said last night at the Pearl Hotel in Phuket Town. He explained that he had at first been persuaded by senior TRT members to stand as MP for Phuket District 2. However, others were keen to see him stand for District 1, which encompasses Phuket Town. “But I have always refused to stand for District 1 because there’s a candidate for that area already,” he added. Local dentist and long-time TRT party organizer Dr Yada Palimaphan has been tipped to be the party’s candidate for District 1 in 2005, though the Gazette understands that Dr Prasit’s departure is prompting a major rethink of TRT strategy in Phuket. From now on, Dr Prasit said, “I’d rather choose to do my own business. It will be better not to write about me in terms of political issues but as an ordinary citizen.” Asked about his plans, he said, “I may become a lecturer or launch my own monthly economic magazine.” Two candidates – Samroeng Chaisorn of the OrBorJor Gao Mai TRT (“New Step TRT”) party and Wisut Santikun of the OrBorJor Gao Mai Khonbaanrao (“New Step Our People”) party – will compete to take Dr Prasit’s place in the OrBorJor in elections on March 14.