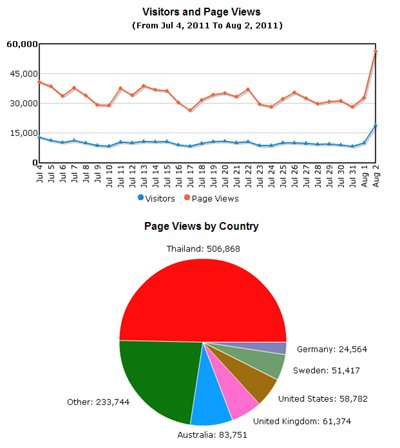 PHUKET: Not since the tsunami in December 2004 have readers around the world shown so much interest in a single event in Phuket. Yesterday, as on December 27, 2004, the day after the waves hit, the demand for news, fueled by the Phuket murder of Swedish national Maksim Schantz, swamped and knocked over the Gazette Online for a period of about eight minutes.

The Gazette’s stories about the murder included five updates within a 13 hour period, and sent our readership statistics off the charts.

With close to 60,000 page views from more than 20,000 visitors, it was the website’s second busiest day since its launch in 1997. (See chart above or, for greater clarity, click here.)

The statistics are drawn directly from independent provider Google Analytics and presented to our readers in chart form, with the charts changing at 3am every day.

In the statistics presented for the 24 hours ending at 3am today, it is to be noted that Sweden, with more than 51,000 page views, was the world’s 5th largest consumer of our website’s information, surpassed only by Thailand, Australia, the UK and the United States.

The Gazette Online enjoys Google’s top ranking for ‘page importance’, (6), sharing that honor with one other (Phuket.Com). The site is ranked Number One and Number Two in Google’s search results for both ‘Phuket News’ and ‘Phuket Newspaper’, and Number Three under ‘Thailand Newspaper’ (after the Bangkok Post and our partner newspaper The Nation.).

All news stories in the Gazette Online appear also in the company’s powerful new iPhone and iPad applications, with more than 4,000 downloads from the Apps store since the products were launched earlier this year.