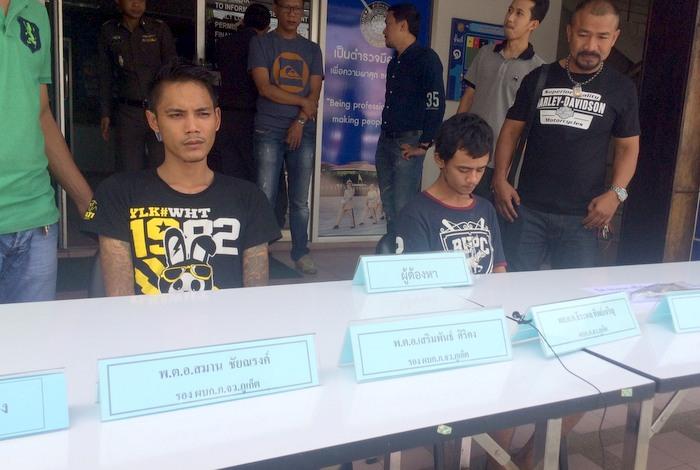 PHUKET: Police have captured two men allegedly involved in a Patong cafe brawl that left one dead and another injured on Tuesday.

Police said the two men were apprehended after one man turned himself in and revealed the location of his accomplice.

“We received reports that the primary suspect, Nattasak Srimok, 24, and his friend Issara Boontos, 25, were fleeing to Trang. While they were in Krabi, en route to Trang, Mr Issara informed us that he wished to surrender himself,” said Col Chaiwat Auikam of the Patong Police.

The two men, along with four others, are allegedly part of a mob that attacked a cafe employee and his acquaintance, stabbing them outside a karaoke bar in Patong (story here).

Mr Nattasak was previously only known to police as Mr Ble. Patong Police said they are still hunting for the remaining four suspects.

Mr Issara confessed and is being charged with murder and possession of a weapon.

“Mr Nattasak was reportedly staying with his aunt in Trang,” Col Chaiwat said. “We coordinated with Trang Police, who raided the house and delivered the suspect. He also confessed and was charged for murder and possession of a weapon.”