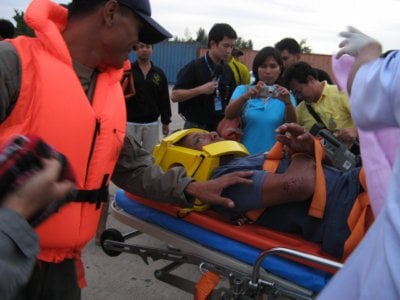 PHUKET: One of two recreational fisherman missing since Saturday when a boat capsized off Koh Racha Yai was finally rescued by Phuket Marine Police yesterday afternoon after surviving five days on a small, rocky island.

Phuket Marine Police aboard the vessel Chawengsak Songkram picked up Surat “Dang” Boonserm, 53, about 4:30 pm yesterday after he was spotted on the small, rocky island Koh Nui, near Koh Racha Noi.

The first three fishermen, rescued about 5 pm on Monday after spending more than a day floating in stormy seas, told Marine Police that K. Surat and K. Phuthong had left the group to swim to a small island visible in the distance.

Yesterday, the Marine Police launched a dinghy to scour small rocky islands off Koh Racha Noi, where surrounding waters are too shallow for large vessels to approach.

K. Surat, a cook at Mae La Seafood Restaurant at Saphan Hin, was finally spotted on the tiny island of Koh Nui. Battered, bruised and very hungry, his first words to his rescuers were a request for food.

It took Marine Police about two hours to rescue K. Surat and get him to a waiting ambulance from Vachira Phuket Hospital. Part of the delay was due to the fact that a large cruise ship from the Star Cruise line had to be moved to allow the Chawengsak Songkram to berth.

Once onshore, K. Surat was rushed for treatment for numerous cuts and bruises, most of which were inflicted when he climbed over barnacle-covered rocks onto the island while strong waves pounded the shoreline.

Still traumatized by the five-day ordeal, K. Surat said, “I will never go back to the sea for as long as I live.”

Asked why he and K. Phuthong had chosen to swim away from the group, he said they thought they had a better chance of survival by swimming to the island.

Large waves separated him from K. Phuthong as they approached the island around dusk.

“He was there with me and then we were separated when a huge wave hit. When I looked again I couldn’t see him through the darkness,” he said.

K. Surat was battered against the rocks by the strong waves but finally managed to pull himself up to the relative safety of tiny Koh Nui.

“It is a very cruel environment. There are no people, but lots of dangerous animals like pythons, monitor lizards and huge stinging ants. I was afraid they would be attracted to my bloody wounds and try to eat me so I spent much of my time up a tree,” said K. Surat.

Although a Buddhist, K. Surat said he prayed to local deity Por Ta Toh Sae, after whom Toh Sae Hill in Phuket City is named, for safe deliverance back to Phuket.

“I survived by using leaves to collect rainwater on the rocks, but as a result also consumed some seawater. I also tried to suck fresh water from small cavities in the rocks. I saw the [Navy] helicopter pass by [on Tuesday] and rescue ships just about every day. I shouted at the top of my lungs and waved my life jacket to try and attract attention, but they didn’t see me,” he said.

K. Surat’s wife, 52-year-old Jeed Boonserm, told the Gazette she had gone out with the Marine Police every day and was with them when her husband was finally rescued.

“I was crying so much that my eyes stopped making tears,” she said.

Also accompanying Marine Police on the search were Mae La Seafood Restaurant owner Ou Tien Fa of Taiwan and restaurant staffer Jit Suwannarat, both of who were rescued on Monday.

Marine Police are continuing the search for K. Phuthong, who they think could still be alive on an island somewhere in Phang Nga Bay as he was last seen wearing a life jacket.