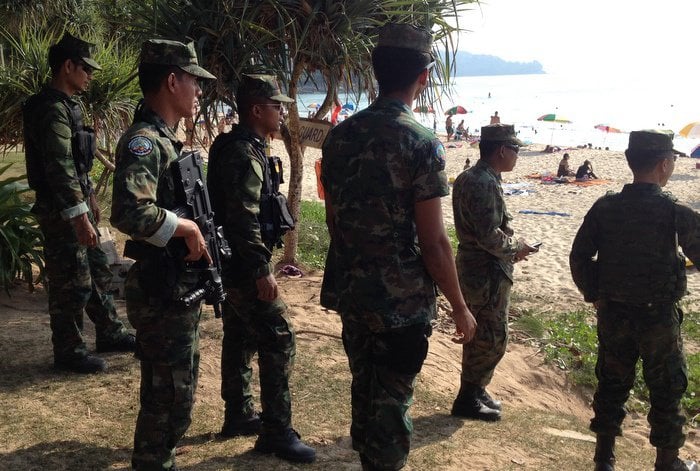 PHUKET: The dangerous jet-ski antics that continue to plague Surin Beach have forced local officials to consider installing roped-off swimming areas, despite a complete ban on jet-skis already in place at the beach.

“Four jet-skis came to Surin from Bang Tao. They came into the surf line, zig-zagging and driving recklessly in the designated swimming area,” a regular beachgoer, who declined to be named, told the Phuket Gazette.

“Two of the jet-skis then collided. A lifeguard on a rescue board responded, but [the tourists on] all four jet-skis fled back to Bang Tao.

“For the last four days… jet-ski renters [have been] jumping over to Surin, where most of the surf line is not roped off. They jump waves and circle and spray swimmers – it’s a war zone out here.”

The incident today follows Ma-ann Samran, president of the Cherng Talay Tambon Administration Organization (OrBorTor), witnessing a jet-ski from a nearby beach coming dangerously close to swimmers at Surin Beach on Tuesday.

Mr Ma-ann was conducting an inspection of the beach along with military and Tourist Police officers, when one jet-ski buzzed past unsuspecting swimmers.

The beachgoer who witnessed the close call today was also at the beach on Tuesday.

“At 2pm, a dark-blue jet-ski rented from Laem Singh Beach was driven to Surin Beach, where the rider repeatedly came dangerously close to swimmers at high speed,” he said.

“This continued for 45 minutes. At that same time, Mr Ma-ann, Tourist Police officers and soldiers were patrolling the beach.”

The officers proceeded to the shoreline and waved down the jet-ski renter, the beachgoer reported.

“As the renter approached the shore, he saw the officers and fled on the jet-ski back to Laem Singh.”

Currently, only a small section of the beach has been roped off and lifeguards have set up yellow flags to mark safe areas for swimming. However, these no-jet-ski zones are regularly violated.

“I wouldn’t like to have roped-off areas and buoys at Surin Beach at all. Jet-skis are already banned, and having ropes and buoys in the water would affect the natural beauty of the beach,” Mr Ma-ann told the Gazette today.

Regardless, Mr Ma-ann said that he will meet with Phuket Marine Office Chief Phuriphat Theerakulpisut next Wednesday to discuss ways to ensure people’s safety at Surin Beach and hopefully resolve the problem.

Chief Phuriphat today blamed reckless tourists for the dangerous jet-ski antics that have killed, maimed and otherwise threatened tourists’ safety at Phuket’s beaches over the years.

“Most of the problems that happen to tourists are caused by tourists who do not abide by the rules,” he told the Gazette.

“Even in this case [on Tuesday], the person who rented and operated the jet-ski in the prohibited area was a tourist.

“We have already laid out the rules for the rental operators, but they are hard to enforce if tourists themselves violate the rules.”