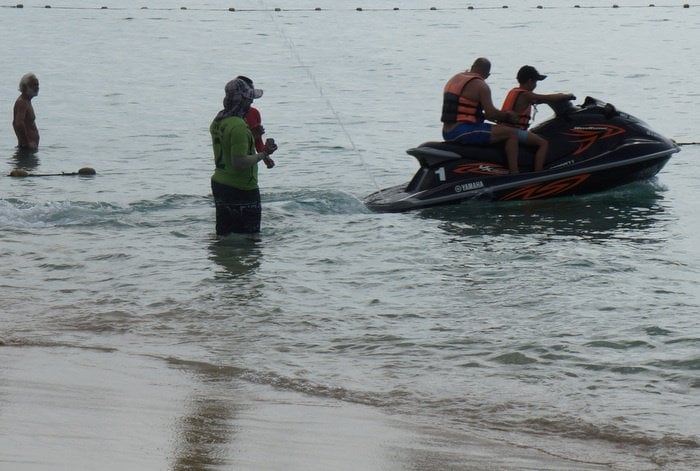 PHUKET: Surin Beach lifeguards have warned beachgoers to exercise caution during the next two days, as a storm system in the Indian Ocean combined with king tides is generating unseasonal waves and dangerous shore break conditions.

“Conditions will be especially dangerous near high tide for the next two days, between 10:00am and 2:00pm. Swimmers should stay well away from large waves breaking on the shore,” a Surin Beach lifeguard told the Phuket Gazette.

The lifeguard also voiced his concern about reduced visibility near the surf line, which could hide swimmers from jet-skis and lead to possible collisions.

Though jet-skis are banned from Surin Beach, tourists are driving them from nearby beaches to Surin to play in the surf line, creating extraordinarily dangerous situations for swimmers (story here).

“The safety rope lines at Surin, except for one small section of the beach, have not been installed this year. As a result, swimmers are much more vulnerable to jet-ski accidents in the non-roped areas,” the lifeguard said. “We have set up a ‘safe’ swimming area marked by the red and yellow flags. However, jet-skis are repeatedly entering this area. Therefore, all swimmers at Surin Beach are advised not to enter the water until the safety ropes are installed.”

Despite the lifeguards’ warning, Ma-ann Samran, president of the Cherng Talay Tambon Administration Organization (OrBorTor), has asked tourists not to panic.

“No official report has been sent to me about the weather. If there is something to be worried about, I would have received a letter from relevant authorities telling me to warn everyone,” Mr Ma-ann told the Gazette yesterday.