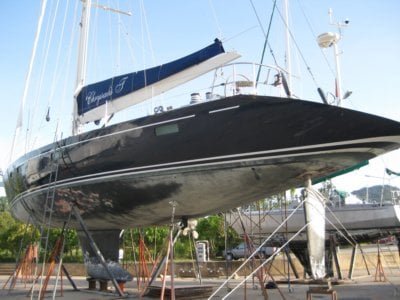 PHUKET: The 77-foot yacht the Chrysalis-T, which was left floundering on the sands of Maya Bay last month after the yacht owner’s 21-year-old son ran it aground during a joy-sail with friends, was successfully re-floated on June 30.

The US$2 million yacht is now back in Phuket and is being repaired at the Boat lagoon.

Trouble began for the young yachtsmen when he took his father’s yacht on an island-hopping holiday around Phang Nga Bay with friends and family.

The Chrysalis-T was taken into Maya Bay on Phi Phi Lay Island – the tourist hot-spot made famous by the Hollywood film The Beach – where it ran aground in the shallows.

The yacht remained precariously balanced just shy of the shoreline for over a week.

According to the yacht’s owner, a British businessman, a broken steering cable was the reason for the boat running aground.

He told the Gazette that the salvage team hired by his insurance company were slow to react.

“When we arrived at Phi Phi, a week after the boat had been grounded, the insurance company’s salvage team hadn’t done a damn thing,” he said.

“If I didn’t go down there and rescue it, the boat would have been a total write off,” he said.

The owner then recruited his own salvage team to get the job done.

A team of 30 made their way to Phi Phi from Phuket for the salvage operation. Seven boats, barges, speedboats, excavators, water pumps, hoses and divers were used to retrieve the Chrysalis-T.

The salvage operation took 48 hours and the boat was leveraged free from the sand just before a major storm swept through the area on June 30.

“The storm would have smashed her to pieces,” the yacht owner said.

The yacht was taken to the Boat Lagoon and is now out of the water so that repairs to the damaged rudder and scarred hull can be carried out.

The cost of the repairs has yet to be determined.

The owner said that the boat would be out of the water for at least a couple of months and that he expected the insurance company to cover the cost of the repairs.