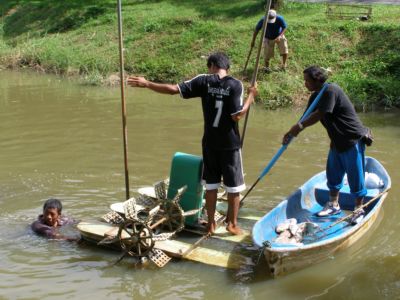 PHUKET CITY: Scores of municipal workers have been working since Saturday morning to remove thousands of rotting fish from the main pond at Suan Luang Park, after a group of fishermen were caught using poison to kill and capture them on Friday night.

An officer from Phuket City Municipality, who asked not to be named, told the Gazette that the municipal employees responsible for patrolling the park at night first noticed fish floating on the surface of the pond between 2 am and 3 am on Saturday August 16.

A subsequent search led to the detainment by security guards and eventual arrest by police of four fishermen who were using chemicals to kill the fish, which they then recovered using hand nets.

The men had planned to sell their catch at a local market, the officer said.

The officer described the chemicals used by the fishermen as “similar to look men (moth balls).”

Also collected as evidence were the fishing nets and 80 kilograms of dead fish, mostly pla nil (Nile tilapia) and pla duk (catfish). Both are staples of the Thai diet and are farmed extensively throughout the country.

Although there are red signs posted around the pond that make it clear that fishing is forbidden, the number of fish in the pond probably made it too attractive for the suspects to resist, she said.

People commonly release fish into the pond as part of merit-making ceremonies, she added.

The murky pond has four battery-operated paddle aerators to help keep oxygen levels in the pond high enough to sustain the fish that live there, she added.

Many smaller species of fish were able to survive the poisoning of the pond, she said.

“The water gets quite dirty, so we need to pump it to the treatment plant in Vichit,” she added.

Security guards and municipal officials did their job in helping to arrest the men so the public shouldn’t become unduly worried by the incident, she said.