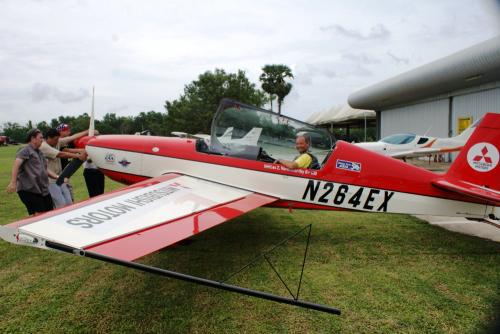 PHUKET: The Phuket Gazette has just been advised of an Airshow over Patong Beach tomorrow (Sunday, December 15) at 4pm. Organized by Patong Municipality to celebrate the opening of Phuket’s high season for tourism, the show will be repeated, also at 4pm, on Monday and Tuesday as well.

The show stars world-renowned stunt pilot Les Vorosmarthy who flew into Phuket Airpark from his home base in Malaysia just three hours ago. No stranger to our island, having performed in four other shows here over the past three years, Les is expected to wow thousands of beach-goers as he puts his state-of-the-art Extra 300 stunt plane through its shocking repertoire of spins, stalls, slips, barrel rolls, snap rolls, wing-overs, loops, waterfalls, ‘Immelmanns’, upside-down everythings, and who-knows-what-else.

Reached by telephone late this afternoon, Les told the Gazette that he has a couple of surprises in store for tomorrow. The first is a whole new look for his beloved airplane. Previously dressed in red from prop to tail, the plane is now wearing a Red Bull uniform and will be very easy to spot, and hear, from absolutely any point along the beach.

The second surprise is perhaps better left unsaid, but suffice it to say that Smokey the Bear has experience with it.

Also guaranteed to catch the attention of the crowds is Corey Parker, the well-known American sky diver now resident in Phuket, who will be jumping out of the high-performance, single-engine Piper Lance owned and flown by Phuket Airpark manager Pat James. Corey’s parachute is scheduled to open at about 4:30pm as he approaches his landing near the police box on the beach at the top of Bangla Road.

The bull, the bear and the sky diver. Don’t miss ’em. The show is free of charge and the whole of Phuket is invited.